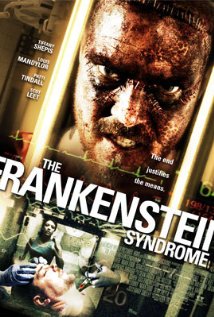 “The Frankenstein Syndrome” on IMDB

[This is the seventh review for this edition of  my semi-regular “my-wife-and-kids-are-visiting-relatives-so-I’m-watching-loads-of-crappy-movies” film festival.]

I was fairly impressed with this overall.  Although despite being “Inspired by…” and having several call-outs to “Frankenstein” there really isn’t a huge amount of overlap here.  Yes, in the most fundamental, most bare-bones way the two stories connect, but beyond that this is an original story.  Also the special effects kind of stunk big time.

But that’s really it for the bad!  The story is clever enough to carry the whole film (unlike many other films in this budget range that stretch a 10 minute idea into 90) and – no spoilers – there’s NO twist ending!  In an American horror movie!  No monster that we thought was dead jumping out of a closet or a mirror.  No character that we thought sane looking meaningfully into the camera as if to say “my turn!”  The movie ends exactly where and how it should – this alone makes it worthy of attention.

The cast is populated with many b-movie and television regulars and stars “scream queen” Tiffany Shepis.  I honestly couldn’t find a single major problem among them.  There won’t be any Oscars given out to be sure but nobody will have you chuckling at their ineptness either.  Performances are all solid and motivations clear and believable.

There was a religious side-plot that I could have done without personally but it was handled well and didn’t dominate.  The main plot stayed the course allowed for a beautiful slow-burn that’s rare in this class of film.  This is much more “drama” than “horror” and that’s a good thing as far as I’m concerned.  If you’re a fan of morality plays (especially of morality plays with the odd decapitation) then this is definately one to watch.