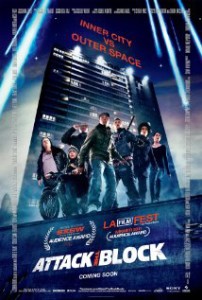 “Attack the Block” on IMDB

FINALLY an alien movie with something a little different!  No grey-skinned, multi-limbed, claw-handed, slit-eyed generic E.T.s here!  (OKay… there is one – kinda – but it’s small and gets killed almost immediately.)  The aliens here are jet-black, hairy, indistinct beasts with row upon row of luminescent teeth.  While this relatively simple effect may have been chosen for budget reasons it was used beautifully and to repeatedly great effect.

With the exception of Nick Frost (who is sadly underused in what essentially becomes an extended cameo) the cast is almost completely unknown.  All are effective although nobody really stands out.  The cast is also quite small which creates an odd but inoffensive discontinuity when we’re constantly reminded how very large the apartment building (the titular “Block”) is.

One warning: the film is unforgiving in its use of South London slang and many Americans (even fans of British media like myself) may find it altogether too dense.  On the other hand the story is simplistic by design so missing a significant chunk of the dialog simply doesn’t alter comprehension.  There are aliens, there’s a block, folks are fighting them.  Everything else is just icing.

The film is billed as a comedy and there are definitely a few solid laughs but this is first and foremost a horror movie (albeit one that’s relatively tame with the gore).  Interesting aliens, lots of action and blessedly almost no desire to bog things down with explanations.  It’s the kind of quality, light-hearted horror that you have an absolute blast watching with friends on a lazy Friday night.