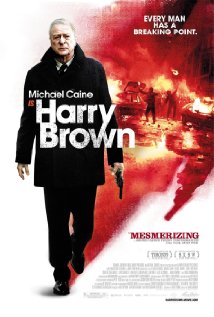 Harry Brown is an ex-marine who, shortly after losing his wife, losses his oldest (and only) friend to gang violence.  Harry Brown decides to get even.  You can say that this is just “Death Wish” with a British sensibility and you’d be right.  However if you thought that was an insult you’d be wrong.

The movie starts out incredibly strong with one of the most powerful opening credit sequences I’ve ever seen.  Frenetic, grainy cell-phone footage that horribly demonstrates the lack of humanity in our villains is intercut with tiny, almost illegible credits fading quietly across a black screen.  The extremes inherent in this are nurtured throughout the film but are never more starkly or effectively conveyed.

Michael Caine is at his absolute best.  His quiet sorrow and initial hopelessness is heart-wrenching as is watching him extended well beyond his capabilities to complete his self-assigned mission.  The director allows Caine’s performance to stand alone more often than not.  The score and staging retreat to the background and the sets are simple and intimate.  Many American directors would do well to learn this secret that filmmakers in the rest of the world seem to know so well: there can be power in silence.  A raging power that’s significantly much more effective for its lack of obvious impact.

My only true dissappointment is Emily Mortimer’s performance; her character’s strong detective very quickly devolves into a wounded little girl.  Instead of driving events she’s swept up by them and her rare, weak attempts to take some semblance of control are almost immediately followed by passionless acceptance of some new affront.  The character may have been written as powerfully introspective but the performance comes across as apathetic and all too often witless.

After a very satisfying slow-burn and truly brilliant sequence where Harry attempts to purchase a handgun the movie does start to slide downhill.  The penultimate scenes are less than original but effective.  Unfortunately the climatic moment of salvation relies too heavily on a deus ex machina instead of our hero’s capabilities.  A more directed, purposeful ending would have, I think, been much more effective.  The only-average ending can’t begin to squander all the goodwill generated by the rest of the film however.  It remains a sad missed opportunity rather than a fatal wound.

Movies like this speak to us on a primal level.  They celebrate our need to defend our homes and loved ones from those would do them harm while confronting our powerlessness to do so.  The crisis that Harry Brown faces is a very real one and his actions simultaneously repel and elate us.  Harry carries us  with him through his fear, his grief and his anger.  With a weaker performance this movie would have felt trite and manipulative but with Caine at the top of his form it’s no less than a classic.