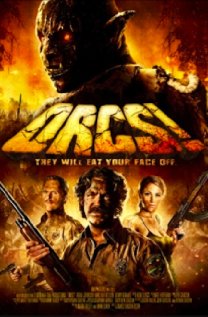 While far from good this was actually, amazingly, pretty good.   While you’ll get a lot of laughs from the acting (all bad but some was truly, horribly, hilariously bad) you’ll also get some from the actual script from things the writer wrote down then made his friends say on camera.  You laugh at things actually intended to be funny.  None of it is genius but just the existence of competence at this level goes a hell of long way.

The story, as I see it, is that some guys got together and eventually put together a few facts:

1) They all really liked “The Lord of the Rings”.  A few of them even had some replica props!

2) One of them knew a guy that worked as a park ranger.  They could totally use the ranger station at night – maybe even the jeeps if they paid for the gas!

3) Another one had an uncle that just bought a really cool new video camera!

So they bought a whole bunch of beer and told everybody they knew they could have some if they pretended to be orcs in their movie.  Then they wrote a loose story and a bunch of LOTR-related jokes (some of which, as noted, were even pretty good) and put a solid long-weekend worth of effort.  From all the evidence I have it looks like they had a hell of a good time.

So yeah, this is a stupid movie with a budget in the dozens of dollars but it’s also pretty damn fun.  Fans of “Lord of the Rings” might find more to love than others, but there’s enough here for anybody willing to overlook (or thoroughly enjoy) some terrible acting and lots of short-bus-special effects.  If nothing else just consider that while you waste your time watching crappy movies some people spend their time making crappy movies and maybe you shouldn’t sit there feeling so superior.