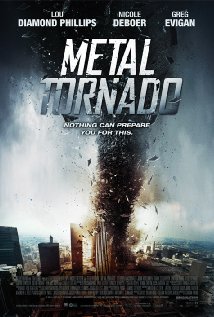 [This is the second review for this edition of  my semi-regular “my-wife-is-visiting-relatives-so-I’m-watching-loads-of-crappy-movies” film festival.]

Lou Diamond Phillips, why?  You’ve got some talent!  Sure, you’ve never really hit the A-list but you seem to be pretty busy with some damn fine television work.  Sure “Stargate Universe” and “Numb3rs” ended but you’ve got nice recurring roles on “Southland” and “Longmire”.  Now IMDB tells me that you’re working on something called “Arachnaconda” [IMDB]?  I’m this close to giving up on you.

Nicole de Boer – same question!  Granted your career hasn’t blossomed as much as should probably have but dammit girl, squandering your sci-fi credibility with these direct to TV crap-fests?  You’re better than that and you know it!  At the very least – until somebody finally comes to their senses and gives you the good work you deserve – force them to treat you better!  You barely get any screen time in this and what you do get is essentially filler.

As for the rest of you… really?  Seriously: when did you just give up?  Did you say “yes” to magnetic tornadoes (yes, magnetic-fucking-tornadoes) because it was at the end of the day and you wanted to hit the bar?  Is that why every other female in this movie (even the extras) look like were pulled in from the local strip club?  Did you cast specifically for enormous breasts and plastic surgery?  How much of the already laughable budget was spent on “auditions” and did you even bother to show up for work the next morning?

Actually, I’m sorry.  Who am I to be a dick to people for making a living?  I’ve been doing the same job for 15 years and I can’t say that I’ve made the world a better place by it.  So, on second thought, if working on these SyFy funded these abominations lets you feed your family by all means keep taking their money as long as they hand it out.