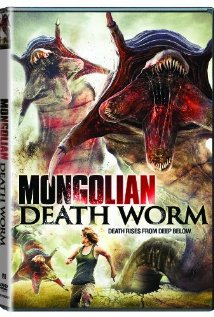 [This is the third review for this edition of  my semi-regular “my-wife-is-visiting-relatives-so-I’m-watching-loads-of-crappy-movies” film festival.]

I don’t know why I decided to inflict another SyFy Original upon myself (and my defenseless child).  It’s like walking into a store and asking which aisle you need to look in to be kicked in the balls.  While the credits were still rolling the line “You look like you could use some meal” was said.  That the director heard that and said, “fine, whatever,” pretty much says everything you need to know about the movie.

(SyFy channel – why do you hate us?  What did we ever do to you?  Were you a chubby child and are getting back at humanity for the bullying you suffered?)

Out of all the movies I’ve seen that feature giant worms attacking an oil refinery this is the worst one.  This muddies things with an unneeded treasure hunting plot that the budget just can’t support (yes, I’m sure “the lost tomb of Ghengis Khan” does have a polished cement floor) and simply too many characters to keep track of.  The special effects are exactly as bad as all the other special effects on made-for-TV horror and I guess it goes without saying that nothing in this movie looks “Mongolian”.

I guess the “lovable rogue” hero does come close to actually being lovable every once in a while.  Also the heroine, while totally useless as a character in the movie, is easy on the eyes.  I think I still have to recommend skipping this one.  Just watch “Tremors 2: Aftershocks” [IMDB] instead.  That movie rocked.