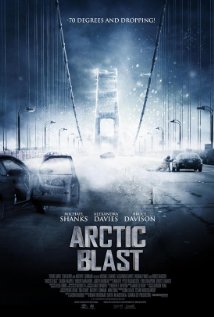 [This is the sixth review for this edition of  my semi-regular “my-wife-is-visiting-relatives-so-I’m-watching-loads-of-crappy-movies” film festival.  Yes, we’re back to the schlock.]

THIS movie says that opening a hole in the ozone layer will send a cloud of freezing air across the Tasmania (and eventually – through the magic of montage – open similar holes all across the globe).  This air creates a freezing fog that can travel hundreds of miles and stay cold enough (despite the massive increase in pressure) to snap-freeze people (and dogs).

THE STUPID BURNS SO BAD!  THE GOGGLES – THEY DO NOTHING!

That said this movie was shot in Australia so, to give it some credit, the acting’s really not that bad at all – budgets clearly go a bit further down there.  What they’re saying is still stupid, but they do say it well.  Michael Shanks stars and even tho’ the script is best personified by a naked, blithering idiot punching himself in the face repeatedly Shanks is a professional and he sticks with it.  To bad the movie just plain isn’t worth it – it’s too polished to be laughably bad and too stupid to be almost-good.