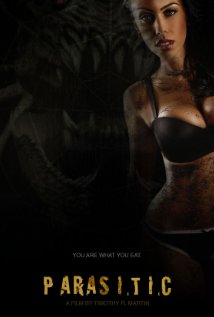 [Wife and kids are away on their last weekend jaunt before school starts so while I catch up on some mind-numbingly tedious work I’m distracting myself with bad movies.  This is the fifth.]

So the idea here is that a comet crashes into the ocean – two fisherman see it.  Then the fish they catch – which somehow is infected by the comet they just saw – is served as sushi to a bartender at a club.  The bartender has the only key to the place and after she turns into a monster from the space-sushi the after-hours crew is stuck inside.

The monster looks only slightly more unrealistic than the actresses’ breast implants.  I mean seriously, when did perfectly spherical, immobile, watermelon-sized breasts become something somebody would pay thousands for?  I love boobs, all kinds of boobs, but these just aren’t boobs – they’re crudely drawn cartoons.

Anyway, the cartoon boob-monster starts picking people off and turning them into monsters as well.  The people who are left can’t access the outside world because in an incredibly dialog-dense scene we learn that a) nobody has a cell-phone, b) the only land-line in the entire building is in the office (which is locked with the same key they don’t have), c) the fire and burglar alarms are all non-functional and d) all the windows are barred.  Most of the following scenes are too dark to see anything because for some other reason the lights don’t work either.

After another incredibly dialog-dense scene where people who can’t act are told to talk at length there’s a kind of fight and the cartoon boob-monster is killed.  Then there’s a completely nonsensical super-surprise twist ending that takes over 10 minutes.  Honestly, if you’re really interested in cartoon boob-monsters skip this and hit up your local anime shop – I’m sure there’s to satisfy and I’m positive that it’s better than this.