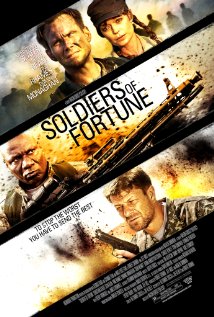 “Soldiers of Fortune” on IMDB

This is a pretty serviceable action flick.  The hook is that a no-name banana republic is attempting to outsource its rebellion against a tyrant general by selling it as a real-life adventure for billionaires (get it?  Soldiers of Fortune?  Get it?!)  To keep their spoiled bags of money safe in an active war zone they hire real-life disgraced commandos Christian Slater [IMDB] and Freddy Rodriguez [IMDB].  Of course things go well-and-truly pear-shaped almost immediately.

This is full to the brim with B-list actors but all of them are pretty great B-listers.  Colm Meaney [IMDB], one of my favorites, seems to be getting typecast as a bastard but at least he’s working.  Ving Rhames [IMDB] and James Cromwell [IMDB] are always worth the time and it’s nice to see a movie where Sean Bean [IMDB] (spoiler!) doesn’t end up dead.

The action sequences suffer just a bit from the budget but only in comparison to the real blockbusters.  The premise carries things well enough but really skirts the edge at points.  Technically there’s nothing to complain about and all the performances are good.  Good guys are good, bad guys are bad and anything that might get in the way of that is broadcast plainly in advance so nobody gets confused.  It’s a simple movie but a solid one.  Action fans should definitely give it a shot.