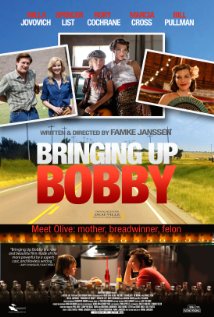 “Bringing Up Bobby” on IMDB

Famke Jansen [IMDB] has a hell of lot riding on this.  This is her writing, directing and producing debut. The story is rather basic.  A mother,  Milla Jovovich [IMDB], is raising her son, Bobby, on the road and trying to escape her con artist past.  When she can’t outrun it any longer and ends up in prison her son is taken care of by a friendly couple (Bill Pullman [IMDB] and Marcia Cross [IMDB]) still reeling from the loss of their own child.

There are shades of “Paper Moon” [IMDB] and “Curly Sue” [IMDB] but nothing serious.  The comparison with them does help to illuminate one of the biggest issues with the movie: Bobby just isn’t very interesting.  His character oscillates between an oblivious spoiled brat, a wiser-than-his-years wannabe con-man and a confused little boy.  Since the script has trouble deciding how it wants to present Bobby, the audience never really connects with him.  This tends to undercut nearly everything else the movie tries to accomplish.

Mila Jovovich is excellent (while she’s definitely one of the most accomplished bad-asses in film people do tend to forget that she’s also an excellent actress).  Her character has some of the same issues as her son but they’re not as pronounced – mostly, I think, because she has the skills to minimize the impact of some questionable script choices.  Bill Pullman and Marcia Cross are both solid support and have some believable chemistry together.

So, bottom-line: how did Jansen do?  Not bad, really.  This is far from a perfect movie – some fundamental missteps and a weak ending tend to undercut what is really a solid first outing.  It really demonstrates how only one or two weak points can snowball across an entire movie.  Jansen made mistakes, yes, but she clearly has some stories to tell and knows how to surround herself with good people.  Based on this I definitely want to see what she comes up with next.