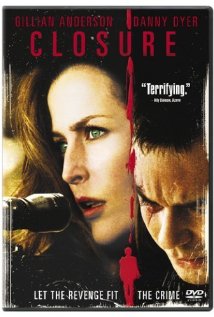 Revenge films tend to form a mixed bag.  They can be very easy to pull off (all you really need is to show somebody doing something horrible to somebody else) which means that a lot of them suffer from laziness.  Others spend so much time on the mechanics of the situation – long, intricate, graphically violent scenes – that they lose focus on the human impact.  It’s difficult to find the sweet spot.  This one starts out strong but unfortunately wanders aimlessly through its last two acts.

The set-up is simple enough.  Gillian Anderson [IMDB] plays a well-to-do woman impulsively decides to invite the guy installing her security system to a party where they hit it off.  On the drive home they run into the wrong people.  He is brutally attacked and maimed, she is raped and they’re left for dead.  Later, after accidentally discovering the identity of the attackers, they plot revenge.

Things unravel pretty quickly from there.  The couple (who, remember, just met) doesn’t really seem to have any reason to stay together besides shared pain.  Many of the scenes would made much more sense if applied to a more mature relationship.  One of the primary threads is a reversal of roles but since we never really knew these characters before their trauma it plays as more of a psychotic shift than anything else.  There’s also an odd subplot about the attacker’s daughter that seems tacked on and plastic and yet is leveraged significantly.

The entire movie (and the tagline, “Let the Revenge Fit the Crime”) seems constructed to highlight a single, penultimate scene (you’ll know it when you see it) but even this seems unbalanced.  The actual ending does, indeed, provide closure (of a sort) but is so abbreviated and surreal it doesn’t provide anything like satisfaction.  Even at only 80 minutes it feels stretched, like a short story padded out to feature-length.

I was still very impressed with Anderson, however.  Her character is the most stable throughout and she does very well with what she was given.  Her character was strong and impressive throughout.  Excellent acting can mitigate many sins but can’t erase them.  It’s a shame that such an impressive leading lady and a promising beginning spiraled so far out of control in the end.