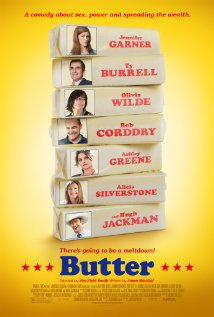 There’s always humor, often some of the best, to be found when people take something too seriously.  It can be anything, but it’s all the better when the something in question is a little… out there.  This is what makes movies like “Best in Show” [IMDB] so good.  Take an activity that we know of but really nothing about.  Include a cast of people, often small-town people, for whom this thing is everything and just sit back and watch the fireworks.

Jennifer Garner [IMDB], as Laura Pickler, gives an amazingly multi-layered performance and proves her range ably.  Her character is, by far, the saddest and most confused but the absolutely unimpeachable layer of false joy Garner gives the performance is something to behold.  Her several internal monologues are definite highlights.  The rest of the cast is very good (especially a fun, but short turn, by Hugh Jackman [IMDB]) but most stay well within their comfort zones.  Olivia Wilde [IMDB], as a selfish, manipulative stripper and sometimes mistress, produces some of the most memorable scenes but unfortunately her character loses focus early on and coasts through the remainder of the film.

The underlying story of  the little orphan girl, played perfectly sweetly by Yara Shahidi [IMDB], proves the heart of the film.  It also provides a significant number of the gags as our whiter-than-white-bread Midwest characters deal with the precocious little black girl.  I was actually quite impressed with Rob Corddry [IMDB] as her adoptive father.  His performance wasn’t amazing but it was genuine and warm.  For lack of a better way to put it this was the first time I’ve seen him actually trying and not just acting like an idiot.

“Butter” has a lot of depth.  There’s subtle (and not-so-subtle in places) political and social satire, significant commentary on “traditional family values” and race relations and self-identity.  It also happens to be deliciously warm and hilariously funny.  Ninety minutes with Butter is an excellent way to spend an evening (if your arteries can take it).