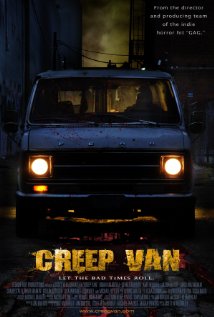 The basic premise is that there’s a guy that we never get to see that’s building really unoriginal, but admittedly deadly, booby-traps into his crappy (damn – “creepy”) van.  He keeps tricking people in – or people just get in for no reason – and killing them.  When that fails (which it does more often than not) he just kinda drives into people.  Or over them.

The only interesting thing is–  Sorry, was that sentence getting interesting?  Too bad, the creep van just came out of nowhere and killed it.  Because that’s exactly what happens in the movie.  We get introduced to some potentially interesting people, think, “finally, something’s happening” and 17 seconds later the creep van kills them.  The boring, dull, completely-uninteresting creep van.

The movie meanders to a point where our dumbass hero meets another dumbass.  The van kills the first dumbass’s friends and kidnaps his sorta girlfriend.  The dumbasses ignore our country’s enormous infrastructure of professional law enforcement and work together to hunt down the van.  By driving to where they already know it is.  The dumb-fucking van.  That kills people.

Except the van is so ridiculously dull that even the movie can’t maintain focus on it and, 15 minutes before the end, it’s completely ignored in favor of the murderer guy we never get to see.  Except we do get to see him.  For a little bit.  Oh, and just to rub salt in the wounds, there’s a twist ending.  A crappy, crappy twist ending (this time I definitely mean “crappy”).  You would literally be better off watching an old van rust for 80 minutes than watching this movie.