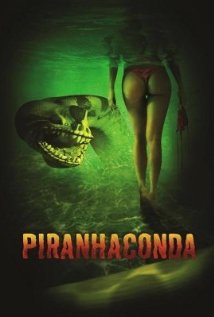 The SyFy channel continues its unspoken mission to destroy the art of filmmaking.  They’ve seen the future and it’s a giant machine that takes two things, smooshes them together and makes them worse than they ever could be alone.

In this case its two misunderstood creepies with unfortunate but usable reputations: the piranha and the anaconda.  A bizarre amalgam of these iconic South American creatures has evolved.  On Hawaii.  It’s been around for at least 30 years and is something along the lines of a mile long but nobody’s ever seen it.

(SyFy is currently in development on “Zebrapottomus”, “Wombagator” and “Elephanzee”.  They’ve got dozens of underage Korean animators making nearly three-dollars a day working 24/7 to get them done.)

In an attempt to get as many clichés into the script as possible we have 1) a scientist that knows about the creature that nobody believes, 2) a film crew wandering into the creature’s domain and 3) a group of vaguely foreign kidnappers gumming up the works.

Most of the movie is basically a series of random vignettes of fake breasts marching into the creature’s toothy face.  It’s not just once or twice but literally like seven times: a woman with pumpkin-sized, unnaturally spherical boobs wanders in, delivers a terrible line or two and is then turned into a red mist by a badly animated giant snake-fish-thing.  This was made for TV so there’s no actual nudity but that’s fine.  Honestly, these are not surgery’s best moments.

Toss this one on the pile.  Kinda fun with a group if you’re in the mood for schlock but useful for nothing else.  It may also be interesting for those tracking the sad, slow murder-suicide that’s become Michael Madsen’s [IMDB] career.