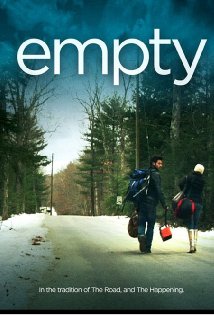 [This is the tenth selection in my irregular, “My Wife and Kids are Visiting Relatives and I’m Home Watching Movies” film festival.]

The story follows a young couple returning from a week-long camping trip to find themselves hundreds of miles from home and in the middle of an extended international gas shortage.  They attempt to make the best of their last few gallons of gas and avoid the collapse of society around them.

The primary issue is the lack of actual actors.  While the two main characters do amateurish, but adequate, work every single other person in the film is plucked-randomly-off-the-street terrible.  The filmmakers smartly work around this by limiting interaction as much as possible.  Secondarily there are numerous, glaringly obvious technical issues (as when, for example, the clock radio is seen to “go black” to indicate a power outage but is burning brightly in the next four scenes while the lack of power is being discussed).

The uneven interactions of the couple do get old quickly (they basically take turns freaking out at one another) but aren’t so unbelievable as to be laughable.  While the dialog and emotions are ham-fisted, often attempting to replace emotion with volume, they had enough sincerity to maintain my interest.  Sadly, they are definitely not the most likable people in the world.  Had the script let up on hammering home already established elements they may have been able to ingratiate themselves to the audience (and each other, for that matter).

The overall premise is interesting enough to carry the story.  Thankfully it’s allowed to breathe as well.  This isn’t a pet project to allow a film-school student to preach to us at length about the necessity of alternative fuel choices.  Heavy, meaty slabs of potential are left on the ground to rot but with the resources they had they did a decent job exploring the novel theme.

The movie does implode, terribly and ridiculously, at the end but it has the good sense to wait literally until the last 10 seconds to do so.  In the end this ultra-low budget drama wasn’t able to overcome its limitations but I have to consider it a success overall.  If nothing else, it tried something new and kept my interest.