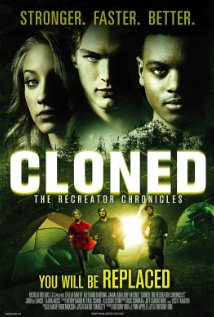 “Cloned: The Recreator Chronicles” on IMDB

[This is the nineteenth selection in my irregular, “My Wife and Kids are Visiting Relatives and I’m Home Watching Movies” film festival.]

Three teens canoe out to an island for a week of camping.  During a rain storm they decide, instead, to break into the only house on the island to use their toilet and sleep in their beds.  Surprised by the returning owners in the morning they’re forced at knife-point to help dispose of two bodies that, it turns out, are exact duplicates of the owners.  Even weirder they’re saved from the couple by exact duplicates of themselves.

The backstory for this one is… how can I put this delicately?  Fucking retarded.  Apparently the house was once owned by a former Manhattan Project scientist who apparently dabbled in cloning.  Although he apparently perfected the process he dumped his formula down the drain.  Now whenever lighting hits the septic tank shit-covered clones pop out!  This happens twice in first 15 minutes of the movie but apparently never before and everything somehow works out that exactly one clone of each of the five people involved is made.

Accepting, as we absolutely must, the “fucking retarded” diagnosis of the mechanics involved, the rest of this… isn’t terrible.  The clones spend some pretty interesting time playing head games with their originals.  The clones, you see, are absolutely certain that they’re better, in every way, than the originals and can’t help but prove it.  The originals see that the clones are, for lack of a better word, soulless but can’t help but be impressed by their confidence.  Slowly the situation comes to a boil as (it’s not a spoiler to say it since it’s on the damn poster) the clones try to replace the originals.

Everything is decent – acting, staging, script, etc. – nothing is great.  The whole production seems to scream, “TV Movie!”  Still, it’s a not a terrible TV movie.  If you’re willing to give this one some slack it pays off.  Not a lot, mind you, but it does pay off.