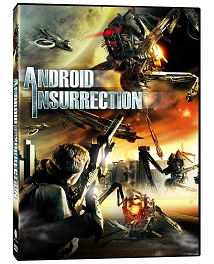 This a terrible movie full of terrible things.  But it is damn funny.  It’s not meant to be funny, but it’s damn funny.  Hard to watch, harder to follow and ridiculously difficult to take seriously, but damn funny.

It has all the problems of z-budget sci-fi.  Terrible sets, terrible green screen and terrible integration of the, honestly, actually pretty good CGI.  The whole movie gives the impression that one guy got pretty good at making robots on the computer and his dumbass friends decided that they would make such an awesome movie!

There are truly hilarious continuity issues and staging.  The movie, set in the year 2532, starts in the “desert of Philadelphia” and quickly moves to an abandoned lab in Yonkers.  But during the big climax we hear the line, “You better hurry, they’re about to nuke the planet!”  The main nemesis in the movie is a 45 tonne “Hunter-Killer” robot that somehow “hides” on the ceiling.  They literally spend half the movie staring and firing randomly at the ceiling.

This isn’t going to be a classic; not even a cult-classic.  But it does uphold the time-honored tradition of actors playing robots by talking slowly and incessantly cocking their heads.  No matter what else, it does have that going for it.