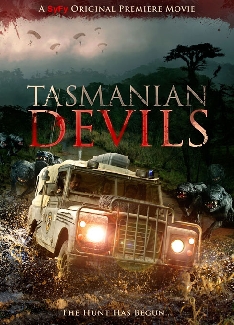 Would you like to point out on the doll where they threatened to hurt you?

Seriously: Danica McKellar is so much better than anything in this movie.  She’s legitimately brilliant and, especially when you consider that she’s just shy of forty, still looks insanely great.  Yet in this she’s squeezed into what a stripper might use as a “uniform” and forced to say and do ridiculous things.  To the first point, some advice for the filmmakers: truly hot women don’t need to flaunt it and, in fact, look worse for trying.  To the second point: why, movie? Why?

The entire cast, for the most part, are television veterans from popular genre works.  All of them have done good work.  They are all demonstrably better actors than this movie concedes or allows.  I like to think that this was a weekend lark.  A phoned-in performance and a quick paycheck.  But I’m not so sure.  The kind of abuse, both mental and physical, that a movie like this must exert is immense.  There should be a charity to help these people.

The movie is terrible.  The monsters are stupid, the effects are awful and the story is dumb.  The scariest thing was (and this is a true story) that while we were watching it a large, hairy centipede crawled up the wall from behind the TV (it’s getting cold, they’re coming in).  While this admittedly scared the crap out me, I’m not ready to give the movie credit for it.