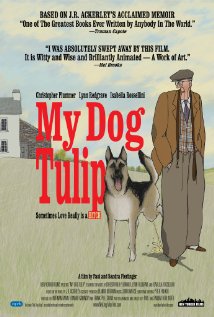 “My Dog Tulip” on IMDB

This is an odd little animated movie that I immensely enjoyed.  The story is, basically, a biography of Tulip, an Alsatian dog owned by Londoner J.R. Ackerley.  Tulip is, most people would have to concede, a “problem dog”.  She’s rambunctious, hyperactive, possessive and unruly.  Her owner lives in constant wonder of her.

The rough, sketchy animation style fits Christopher Plummer’s [IMDB] open-ended narrative, really a modified reading of the novel, exceedingly well.  Other actors fill in minor roles, but the bulk of the time is spent on solitary introspection.  As an odd piece of trivia, especially considering that she had very few lines, this was also Lynn Redgrave’s [IMDB] last film performance before her untimely death.

The film has two primary traits that work against it broadly, but elevate it when more thoughtfully considered.  Firstly, the book from which it was taken was released in 1956.  This places most of the events of the story in the 1940’s.  Rightfully, no attempts were made to update or modernize the story and this may cause confusion to some people.

Many things that modern dog lovers take for granted simply didn’t exist.  Tulip is walked through a busy city without a lead.  With the exception of one extended anecdote, no attempts are made to clean up after her.  In the longest segment we follow Ackerley’s struggle to breed Tulip with a suitable male.  The lack of consideration ultimately given to the puppies will likely strike modern pet owners, raised to consider neutering a moral obligation, as somewhat cruel.

Secondly, the movie takes a decidedly canine view of affairs.  The narrator talks openly and at length about bodily functions and sexually dimorphic behaviors that most pet owners prefer to shamefully ignore.  At points, the descriptions become positively lewd.  While I might admit to some minor discomfort (an extended description of a dog’s vulva not being on my list of expectations) I concede that this frankness accomplished a very important goal.

This is a story about a dog.  A real, actual, once-living dog.  The movie, inheriting from the book, utterly refuses to anthropomorphize Tulip in any way.  There are obvious emotional and behavioral commonalities between man and man’s-best-friend but no attempts are made to hide or implicitly denounce any behavior.  In fact, the opposite is true: Ackerley delights, absolutely revels in, events as simplistic as a bowel movement.

The narrator so openly and joyfully accepting everything about Tulip forces the audience to either make the same concession or admit the obviously hypocritical stance that dogs are only really attractive when they’re acting like people.  (I suppose a third option would be the non-hypocritical stance that you just don’t like dogs, but I doubt that you’d be watching this movie in the first place were that the case.)

Ackerley’s affection for his nervous, neurotic dog is infectious and this affection is bolstered greatly by Plummer’s warm narration and the organic, approachable animation.  The movie is, in the freest sense of the word, a great love story.  Not a typical one, perhaps, but a great one nonetheless.