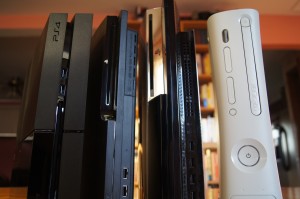 I preordered the PS4, in an adrenaline rush, moments after Sony’s insanely effective E3 press conference.  Like most people, apparently, I immediately unboxed it and posed it with a bunch of other systems.

It’s an impressive piece of hardware.  Sleek, elegant and signature Sony in all ways.  It has an almost identical foot print as the PS3 slim (and the two stack very nicely).  The internal power supply may have added some overall depth to the system but makes integrating it with your other components a breeze.

The controller is a definite improvement but (and from the other reviews I’ve seen I’m apparently in a minority here) I thought the Dual Shock 3 was already damn near perfect.  The triggers on the Dual Shock 4 are more suited to shooters than the more pedal-like options on the DS3 and the grips slightly extended.  The PlayStation button is slightly more difficult to reach but in exchange we now have a touchpad.  It’s exactly as refined as you’d expect a fourth generation design iteration to be.

Here are some more comparison images of the consoles and the controllers: 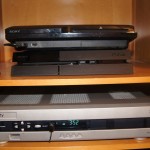 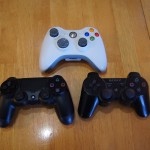 The PS4 compared to an original PS3 Phat, a second generation PS3 Slim and a first generation XBox 360. 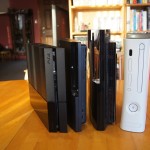 The PS4 compared to an original PS3 Phat, a second generation PS3 Slim and a first generation XBox 360.

All things considered the PS4 is a damn impressive piece of hardware.  I had to ruin it by turning the damn thing on.

I received the unit, UPS being what it is in this area, at around 3pm.  I wasn’t able to actually log into the Playstation Network until after 8pm.  Not being overly enthralled with the launch line-up I didn’t have a disc-based game so I could do… pretty much nothing.

This, it may go without saying, cooled my excitement for the system considerably.

Once I could get in I was impressed. The interface was clean and snappy. The cross-media bar has been retired but lives on in memory as an integrated icon bar at the top of the home screen. The main screen, thankfully nothing like the cluttered mess that graces the Vita, presents a single horizontal row of tiles representing your games and media applications. I’m not sure how well this will grow with my library and the automatic sorting at play seems… odd, but I’m willing to be optimistic.

I installed “Resogun” and “Contrast”, both perks of my existing PS Plus account.  Because I already owned it I also installed Flower, which I immediately started just to see if anything had changed.  I then played through it completely (yes, it’s that good).  I decided to save Contrast for my wife who had shown some interest. Resogun was a fun distraction but not as immediately accessible as it’s predecessor, “Super Stardust”. I also set-up up Amazon Prime and Netflix.  Throughout all of this I was continuously interrupted by notifications that, “Playstation network is currently undergoing maintenance.”

Any excitement I had getting my own PSN account working fizzled when I added my son’s account, a 6-year-old sub-account to my master account. None of the vaunted social features are usable by sub-accounts. No video sharing, no streaming, no screen shots or Facebook integration. Sub-accounts still can’t be promoted to a master account or given escalated privileges. Sony’s treatment of sub-accounts always has been, and remains, completely broken.

It was ridiculous that that a system was built that didn’t assume children might grow up, bullshit that it was allowed to remain unfixed for six years and a complete and total clusterfuck that it was migrated as-is to a new console. I’ll be talking about this more, soon, but suffice to say I ended my first extended session with the PS4 with some disgust due to this.

Despite this, the PS4 is nothing but potential. The hardware is fantastic. The software is promising. Those that remember the state of the PS3 at launch know that Sony, as a habit, releases amazing hardware with incomplete software. We’ll likely see the “real” PS4 emerge sometime in the next few months as a major firmware upgrade.