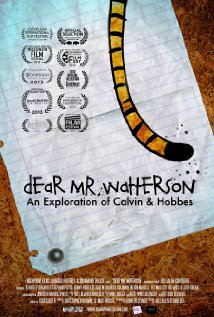 Do you like “Calvin and Hobbes”? Of course you do, you’re not an idiot! Everybody does. (Well, everybody except for sad, attention-craving contrarians who scream, “that sucks, now pay attention to me!” about everything great.) By taking the position that something everybody loves is great the movie sets itself a pretty easy row to hoe.

Thankfully it doesn’t try to actually find or communicate directly with Watterson. Any attempt to engage the notoriously reclusive artist would very likely result in a dull, sad failure. Instead the movie travels to Watterson’s home town where they soak up the atmosphere that inspired the strip and interview the locals about the town’s favored son. We also visit the archive where his original artwork is being stored.

The focus is placed on the (presumed) inspiration for the strip and the lasting impact it has had on fans and the comics industry. A lengthy, but secondary, discussion on Watterson’s controversial decision not to market the property is also presented.  The movie bounces between on-site interviews, staged interviews with other comic strip luminaries and quick talking-head remembrances from anonymous fans. The latter got a little syrupy (and felt like padding) but the rest was interesting and well presented.

Everything is well researched and framed but also hamstrung by the lack of primary source material. A few of those interviewed were business associates or correspondents of Watterson. They could, at least, claim some first-hand knowledge. Most, however, provided only personal opinions and interpretations. As many of the interviewees could easily be the subjects of their own documentaries their opinions are well worth watching, but are still just conjecture. Educated conjecture, to be sure, but conjecture nonetheless.

The movie skirts – and sometimes crosses – that fine line between sincere admiration and blindly annoying gushing. Positive to a fault it doesn’t, by design, offer up and negative thoughts or impressions. It’s an interesting, feel-good diversion for fans but fails to offer any real insight into the strip or its creator.