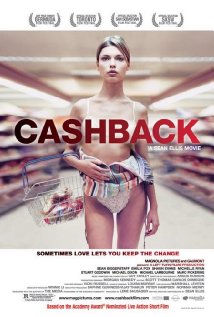 [Wife and kids are away visiting for the holidays. I’m staying home with movies and am taking a break from horror. There’s only so much corn-syrup and red food coloring you can take in a sitting.]

Art student Ben has been dumped. He can’t get over it and develops insomnia. To put his new-found extra time to use he takes a job on the graveyard shift of the local supermarket. There, in an effort to make his shift go faster, he learns how to stop time. No, it really doesn’t make any sense, but since he uses his new found power to see his inexplicably hot customers naked, does it need to make sense?

That’s not really fair. This is an artistic movie, after all and not some penny-peep-show! The point is that Ben is drawing these women. He is an art student after all! Now why they’re all supermodels shopping in the middle night… well, that particular point escapes me. Having Ben expose the true inner beauty of regular people would have made a much more refined, poignant statement.

The movie has several of these small, but pointed, conceits; many exposed in the heavy-handed narration. They don’t totally taint the experience but they do lend it a definite air of self-indulgence. Granted the entire affair with the nudity is actually a relatively small part of a larger whole. Fairly quickly Ben becomes enamored with a fellow employee, Sharon, and spends his frozen moments capturing her.

This is an extended version of a 2004 short film of the same name [IMDB]. Like most expansions of simpler ideas it does seem to have some problems deciding how to fill all that extra time. The romance with Sharon is well-conceived, if simplistic, but much of the material involving the rest of the oddballs working the night-shift feels tacked on. Tone also shifts oddly places. For example, in an ominous, tension-filled sequence Ben discovers  that his ability doesn’t affect everybody but, aside from a moment of inspiration later in the film, this is never again mentioned or satisfactorily resolved.

The whole affair may indeed be self-indulgent but it avoids pretentiousness and remains invitingly low-key. While the nudity and time manipulation feel gimmicky the core of the movie is still an excellent, if unfocused, love story. Ben may be guilty of numerous counts of sexual battery but he’ still still a decent enough guy and Sharon is absolutely the kind of girl that deserves a decent guy. If we have to put up with some naked boobs to see them happy, so be it.