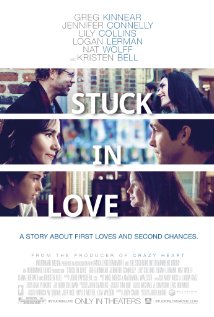 “Stuck in Love” on IMDB

You know what makes a good love story? When you can’t decide if the people involved are assholes or not, that’s what. If they’re clearly assholes then it’s easy: they don’t deserve love and it’s a bad love story. If they’re clearly not assholes then it’s also easy: they’ll get love but it won’t matter because it’s not real and it’s a bad love story. On the other hand, if you’re honestly not sure there’s a good chance that those characters may be worth caring about. Real people are assholes sometimes and a good love story needs real people.

The movie centers around the family of a successful writer who’s still, after three years, having trouble accepting his divorce. His children are budding writers themselves. His proud, cynical daughter is getting her first novel published while still in college. His lovelorn, overly sensitive teenage son is feeling the weight of the expectations placed on him. His ex-wife is dealing with issues of her own. We follow these people for a year, exploring their relationships.

The characters in this movie are all assholes in their own ways. The girl that says she sleeps around because she’s intellectually superior, but is actually terrified of getting close and being hurt, is being an asshole. The guy that waits endlessly for his ex-wife to return is being an asshole and so is the ex-wife that lets him. The kid that falls in love with the pretty girl without getting to know her is, sadly, being an asshole too.

There are no real villains, no real conflict and nothing truly surprising or shocking happens. It’s a sweet movie; an easy movie. It’s a slice of life set against that vanilla, Caucasian, upper-middle class backdrop that lets you focus completely on the story that it wants to tell. You don’t have to worry about money, time, jobs or any number of other things that muddy up regular people ‘s lives. You just have to sit back and watch and hope that they work it all out.

Yeah, everybody’s an asshole of one kind or another, but you’re going to cheer for them anyway. They are, after all, exceedingly nice people and they’re trying really hard not to be assholes. They support one another and generally make each other better people. I love my wife, and she’s an asshole sometimes. She loves me, and I’m a huge asshole. I don’t know if she’s better because of me, but I’m damn certain that I’m better because of her. That’s the way love works.