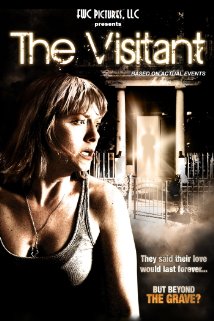 So they did. It kinda sucked but, oddly, it also kinda didn’t suck. The story was a mishmash of various poltergeist clichés. A skeptic in a haunted house. Of course “skeptic” here means somebody that says they’re a skeptic until something moves, then calls their crazy friend for crazy help. “Haunted” also means “generally untidy” as our ghost basically just rearranges things, turns on the stereo and plays the piano badly.

The effects are non-existent. props get pulled by strings, wiggled by stage hands ducked out of camera range and tossed from across the room. Most of the dialog is delivered via video conferencing which eliminates all that pesky “human contact” and “camera work”. In fact, nearly all the decisions made seemed designed to limit the work needed to complete the movie.

The vast majority of the time is spent with just the lead, Janie Michele Simms [IMDB]. She’s forced to say really silly things and do even sillier things, all while dodging the presumably numerous crew members sprawled around the floor shaking the tables. The biggest surprise? She actually sells it. Not perfectly, of course – she doesn’t have enough support for that – but for her part she’s pretty good. Good enough to make me wonder, at least, how well she’d do in a real movie.

Simms’ good performance just can’t carry the entire experience and it all comes crashing down. You’re probably better off skipping this one should it float shakily past on fishing line.