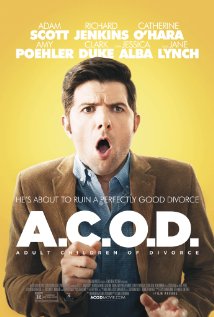 “Adult Children of Divorce” on IMDB

I so wanted to like this. It’s an amazing cast of some of the hottest names in comedy. Just look at that poster! Adam Scott [IMDB]! Richard Jenkins [IMDB]! Catherine O’Hara [IMDB]! Amy Poehler [IMDB]! Clark Duke [IMDB]! Jessica Alba [IMDB]! Jane Lynch [IMDB]! How could this go wrong?!

By making it mind-numbingly boring and wasting all that talent completely, that’s how.

That may have been harsh, but I struggled to find anything that resonated. It aimed for that Judd Apatow [IMDB] vibe, but missed. Apatow pours his soul into over-long character pieces, this tries to do the same thing in half the time without the soul.

Oddly, everything about the movie is well done and everybody clearly puts in the effort. It’s solid, completely forgettable. I took notes during the movie, but neither my lovely bride or I could remember major plot elements two days later. It’s the Chinese food of movies: in and out in an hour.

The cast is amazing. Your mileage may vary; you could end up loving every minute of it. On the other hand, if you had the same experience we did, you won’t remember it anyway, so what’s the harm in giving it a shot?