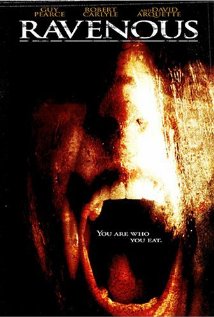 John Boyd (Guy Pierce [IMDB]) is a coward who failed upward during the Spanish-American War of the 1840’s. As a “reward” from his disgusted commanding officer, he’s sent to the nearly deserted Fort Spencer, high in the Sierra-Nevadas, to rot. The few other misfits posted there are, for the most part, comfortable in their near anonymity. This suits John fine. The quiet might, eventually, let him forget the horrors he’s seen.

The little community’s balance is shattered by the arrival of a man (Robert Carlyle [IMDB]) near death, with a fantastically gruesome story. He and a group of others had attempted to make their way over the mountains, but were caught by the snows. Led by a man convinced he had found a new path, the group was forced to take shelter in a cave where they slowly starved. Resorting to cannibalism to stay alive, the group whittled itself down over the weeks and months. Finally the man was forced to flee, lest he become a final meal for the other remaining survivor.

A small force from the fort heads out to find this last, maniacal survivor and bring him to justice. This murderer of women and children. This crazed cannibal. When they finally find the cave, they find a very different reality and all hell breaks loose.

The movie is staged beautifully. The dilapidated fort and the rugged terrain drive home the hopeless loneliness of the situation; the absolute need for self-sufficiently. The characters are archetypal without one-dimensional and the performances are ham-fisted in all the right ways. Scares are mostly psychological, although there’s no scrimping on gore when its needed.

The script tackles serious themes, such as bravery, trust and need, but is more than willing to poke generous fun at itself along the way. While not nearly enough to make this a “comedy” it creates an almost frivolous undercurrent that tempers the darkness of the story. It provides the audience just enough of a distraction to smooth the ride.

The script pieces together the Native American legend of the Wendigo, the history of the Donner party and the horrifying Scottish legend of cannibal Sawney Bean. This is a wonderfully twisted little movie and a real classic of smart, modern horror.