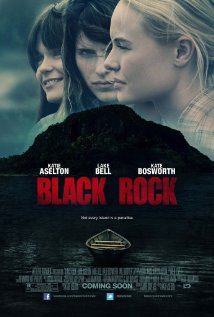 With several movies under the belts of each, Mark Duplass and Katie Aselton are shaping up to be the quite indie power couple. Acting, writing and directing their way into an impressive catalog of smart, quirky genre-benders. This isn’t one of them.

That’s not to say that this is at all bad, but it is about as straightforward as a movie can be. Unimaginative and raw, it tells a very predictable story. It tells it effectively, but simply, and this is both a strength and a weakness.

Three childhood friends, two of which had a falling out years prior, are tricked into reuniting by the third. She corrals them into spending a few days at the end of the season camping on a deserted island where they used to spend time as teens. While there they encounter some hunters and the situation quickly turns very wrong.

The characters and backgrounds are developed only as much as they absolutely need to be. Dialog is purposeful and directly, almost ham-fistedly, relevant to the various motivations. The setting is beautiful, but bleak and monochromatic. Technically, at least, there’s nothing to complain about and it’s clear care and skill were applied.

Positively, the movie clearly accepts its simplicity. The short run-time means that you’re not forced to wade through meaningless filler or unnecessary character development. The pacing is slow, but steady and managed. The story is predictable, but manages to produce effective – sometimes surprisingly effective – tension.

It’s the kind of movie that invites interpretation, but likely doesn’t really deserve it. You can easily build philosophical explanations for many of the events; explaining them as metaphors for feminism, animalism and the fragility of civilization’s veneer. You may assume intentional symbolism in the location, the character choices or any number of things.

In the end I think it’s easier than that. Not everything needs to be quirky, deep and thought-provoking. Sometimes you just want to make a simple, effective little thriller. Something that you’re not at all ashamed of, but not something that you’d consider your best work. This is that movie: solid, but average; effective, but clichéd.