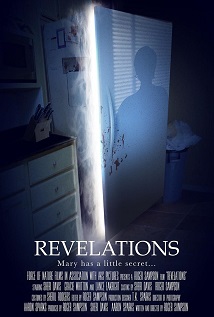 “Revelations” is the first of five short films for a planned anthology, “The Forces of Horror Anthology Series Volume I”. According to the production’s FaceBook page, the four remaining segments will be completed in the next few months. Each story will explore a different sub-genre of horror, but using the same location and actors.

[Full, but dull, disclosure: this review was the result of a request from the writer/director of the movie.]

To set expectations: this production is as low-budget as low-budget gets and it has all the issues that you’d expect from this. Productions like this can’t be reviewed as you would the latest cineplex releases; it will always be disappointing. A $30 steak will beat a fast-food burger every time, but that doesn’t mean that fast food isn’t good. In fact, sometimes, it’s exactly what you want.

Instead, you have to look at the potential of the movie and its ability to overcome (or even revel) in its lack of resources. If something made for dozens of dollars can hold your interest or try something new, then it’s absolutely worth forgiving the inevitable rough edges something as dull as a lack of cash might bring.

Considered from that perspective, this is a success. A flawed success, to be sure, but a success nonetheless. At only 13 minutes long, it is difficult to discuss the story without spoilers. Instead, I highly recommend, since the entire film is available online, that you just watch it:

The story deals, metaphorically, with transformation. It begins with a happy, successful family introduced through some ham-fisted, but functional, exposition. This is followed by a reveal that pierces that illusion, but leads us to several dark assumptions. We know what happened, it’s clear, it’s logical. A final reveal then forces us to discard those assumptions completely for something sinister and unworldly.

My biggest single criticism is the lack of visual contrast across the piece. Every scene is bright, well-lit and airy. A transition to a darker, more claustrophobic lighting would have better mirrored the advancing corruption of our original impression. There’s simply not enough visual change between the scenes to convey the evolution of our understanding.

Many low-budget movies slather on terrible effects where none would often be more effective. Attempting to distract the audience with buckets of fake blood rather than story or craft. Thankfully this didn’t fall into that trap: the few effects used here are subtle, but effective. A similar common ploy of cheap horror is the use of gratuitous nudity, which is also absent here.

There’s a story to tell here. Yes, it might have been told better, but there’s an obvious sincerity to the attempt that has to be respected. I expect to see steady improvement from this team as they complete the remaining chapters of their anthology.

It may be a disservice to the final film to consider this first chapter alone and out of place. I suspect that the whole will be greater than the sum of its parts. Of course, it could all just go to hell as well, but you’ll get nothing from respect from me for somebody with the gumption to try.