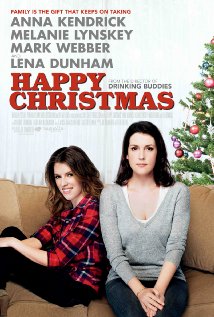 This is one of those super-cheap, mostly ad-libbed, slice-of-life art films that tend to be fatally dull and terminally uninteresting. Only very rarely does the formula result in something worthwhile. Although this has some problems getting up to speed and staying there, happily it’s one of those.

The set-up is that young couple Kelly and Kevin (Melanie Lynskey [IMDB] and Mark Webber [IMDB]) are raising their first child, and dealing with all of the problems that you’d expect a young couple to deal with. Enter Kevin’s fuck-up sister, Jenny (Anna Kendrick [IMDB]), who runs away from a breakup to crash in their basement.

Kelly is struggling to balance her value as a mother and her self-worth after her first book failed to light the world on fire. She, for good reason, doesn’t trust Jenny. Kevin just loves his family and wants to make the best peace. The relationships ring true; we’ve all had some like them.

These movies always seem more like acting exercises caught on film. That accepted, there’s something positive to be said for watching decent actors – and these are all decent actors – actually get into a persona rather than read lines. It’s not always magic, however. There’s more than anybody’s share of verbal tics – “likes”, “umms” and “ahhs” – flying around as the actors struggle to piece together their thoughts.

Unfortunately, this also means using locations as you’ve found them with a minimal of gear. In theory, this results in a raw, unfiltered stage for the actors to descend into and inhabit their roles. In practice, it means that nobody knows where to stand, everything is way too cluttered and you can’t see shit because everything is just plain too damn dark.

Solid acting with little structure and tepid film-making with too few lights make for a decent, watchable drama. Not a great movie, but a solid one if you’re willing to cut it some slack.