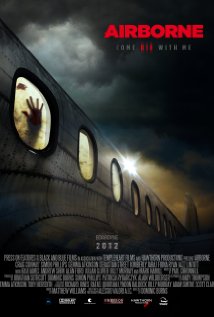 A plane is taking off. It’s the last plane being allowed to leave England headed to New York before a massive tropical storm hits. Instead of being absolutely packed to the brim with people bumped from later flights, it’s nearly empty. Only a handful of people are on board. This is, by far, the most fantastic thing that happens in this movie.

The rest of the movie is easy enough to digest. There’s an ancient Chinese vase that’s probably cursed by an unholy demon. The passengers are all one characteristic ponies. There’s a mobster guy guarded by two goons, a couple that decide to bang everywhere, a scared guy, a calm guy and several others. The crew is just as cardboard and features the suggestive last-minute replacement of one of the regular stewards with a brown guy. Terrorism or Chinese demon: with a brown guy around there’s really no telling!

As passengers begin to disappear for no apparent reason, the plane wanders wildly off course. This alarms air-traffic control operator Mark Hamill [IMDB] who’s slumming it here for some reason. It’s never made clear why a controller would be so concerned about a plane that by all accounts should clearly be New York’s problem at that point, but he is.

The movie suffers terribly from splitting the focus between the traffic control center (and the hilariously bad government agents that appear to take charge of the situation) and the plane itself. Dropping the airport completely might have increased the passenger’s sense of isolation and impotence. It might have allowed some tension to build up. As is, it just complicates an already too-complex narrative.

Without giving the ending away: things happen. Really, too many things. The traffic control center is trying to tell a story about government gone wrong and another about dedication to what’s right. The plane is telling four or five stories of its own while its also working out whether it wants this to be a ghost movie or not.

On the plus side, Alan Ford [IMDB] is in it and says “Fuck” a lot. He’s exceptionally good at that; truly a master. So, if you’re watching this and looking for the silver lining, there you are.