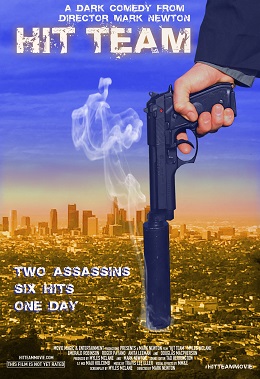 [Disclosure: This was screened at the request of the filmmakers. No additional considerations were made.]

The gags tend to be mostly sophomoric wordplay with a healthy dose of physical comedy. This could have worked, but gags have a tendency to overlap and cancel each other out. For example, a running gag is that Max is a terrible shot. The first time we see him shoot, his target does a cartoonish “dodging bullet” dance and remains whole. Is Max a terrible shot, or is his target able to dodge bullets? The gag only works with some contrast; if one side of the equation is competent and being made a fool of.

The story is nicely predictable (as comedies should be) and the characters comfortably archetypal, but the character arcs are weak. They change their opinions and attitudes drastically without clear motivation. It makes them seem fickle and ill-defined. Caricature often trumps character.

All that given, the movie does have definite high points. For an ultra-low budget offering, there’s surprisingly little to complain about technically. It’s clear that most of the dialogue was looped in later, but it was done skillfully. The camera work, staging and editing are all well above average. The decision to apply poor CGI effects after the fact is unfortunate, but not unexpected, and it’s used sparingly enough not to be distracting.

The complete lack of subtlety may not be as large a stumbling block to some. Depending upon your taste it may be a benefit, if you like that kind of thing. I found it difficult to navigate, but am willing to concede that could be a personal problem. This is both a purposefully and accidentally stupid movie, but it does have a certain undeniable charm.