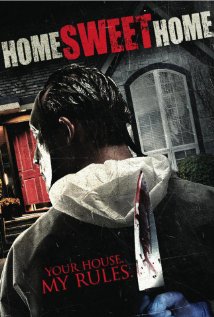 As we watch a mute, faceless killer explore their house, we learn from answering machine messages that they have recently moved out of the city and into this large country house. The killer then methodically prepares the house – sealing all escape routes – and himself for their arrival.

The movie spends the first 20 minutes of its run time trying to commit suicide through gimmick. The lengthy opening sequence provides all of its exposition through voicemails and overhead answering machines. The killer is kept faceless through increasingly ridiculous camera angles and oddly positioned props.

This is the only introduction that we’re given and we’ve not met any other characters. With the exception of the couple, we won’t meet any others. Hiding the killers face may have been meant to retain an air of mystery about him, but the heroic efforts required to do so quickly devolve into ham-fistedness. The answering machine schtick fares better, but as the messages are played multiple times, it could have easily been dropped.

Once the couple returns – and we get actual faces and dialog – the pace picks up markedly. An effective period of cat and mouse with the couple unaware of the intruder follows. This is tense, suspenseful and well-paced.

When the killer does, explosively, reveal himself and subdues the couple, the pace quickens and the stakes are made clear. The movie cleverly dodges some of the worst clichés of the genre while at the same time it commits some of the more banal ones. If you’re anything like my lovely wife, you may also drive yourself hoarse yelling at the victims: they do more than a few really stupid things.

The few practical effects used are all impressive for their restraint. There is blood, but this isn’t a gore fest. The acting from the small cast is excellent, overall.  Good use is made of the physical layout of the home although some shots are overused by the end.

After several twists and turns, the move ends tremendously well with the killer speaking his only words. It’s a stylish, elegant ending that provides closure and catharsis for the audience and the killer’s few words perfectly highlight the depths of his psychosis…

… and then the movie continues on for another six minutes and destroys the near perfect sense of subtle simplicity that had been created. It forces an annoying twist ending – one that had already been effectively revealed – down the collective throat of the audience. It ignores an obvious and effective ending and replaces it with cliché.

This is an effective, but flawed, thriller. Fans of the genre shouldn’t be disappointed, but it’s sadly clear that more focus on the story and less on the gimmicks would have resulted in a much better movie.