At some point in his life, Tom Six [IMDB] thought that sewing people’s mouths to other people’s buttholes would make for a cool movie. He was so enthralled with this idea that he’s spent the greater part of the last decade writing, directing and producing three movies about it. You probably already have an opinion about whether his time was well spent or not. 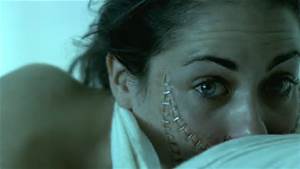 This movie became infamous almost immediately; one of those that gets mentioned at parties just to shock the faint of heart. Almost nobody had actually seen it, mind you, but everybody had heard about it. It was “the sickest movie ever” or “so disgusting that people throw-up just from watching it”.

The problem was, it wasn’t and they don’t.

The idea is disgusting, to be sure, but the film itself is remarkably tame for the reputation it had garnered. Clearly the squeamish need not apply, but seasoned horror fans were less than impressed. There are one or two scenes that push boundaries, but they’re brief and surprisingly non-graphic.

Worse, the story made almost no sense. That an insane surgeon, world-renowned for separating Siamese twins, would want to create “Siamese Triplets” made some sense. As to why they needed to share a digestive track, why they would have to be treated like a dog or where the hell centipedes work in is anybody’s guess. The result was a slow, dialog-heavy movie riddled with enormous plot-holes.

Yet it wasn’t truly a terrible movie. Technically, at least, it was actually quite good. Pacing, sound, camera work and staging were all above average for the budget. Despite almost criminal overacting by Dieter Laser [IMDB] as the surgeon, it was able to build tension and create meaningful emotional connections between the victims and the audience.

It wasn’t good by any means, but it was far from bad. Good enough, at least, to get a sequel funded. 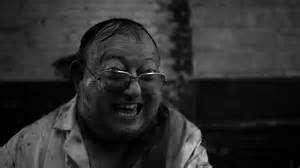 Apparently Six took some of the criticism of the first to heart. Namely that it was too tame to earn the reputation it had gained. Six said that the first film would be “My Little Pony compared with part two” and that people would finally get the “blood and shit” they wanted from the first.

Part two follows Martin (played by Laurence R. Harvey [IMDB]), a mute, mentally disturbed, asthmatic so obsessed with the first movie that he makes it his mission to both recreate and outdo it. His centipede will have a dozen segments. His creation will be crowned with Ashlynn Yennie [IMDB], one of the actresses from the first film conned into coming to London, as the head.

In all possible ways, this movie is the polar opposite of the first. The clean, affluent environment transitions to a filthy warehouse and stained car park. Hastily applied duct tape replaces neat, white bandages. Instead of drugging his victims, Martin simply bashes them over the head with a crowbar. His clumsy attempts at “surgery” feature steak knives and staple guns.

The movie pushed every possible boundary of taste that it could and more than earned the reputation misapplied to the first, even if it did so two years too-late. Every graphic, disgusting detail is lavished both attention and screen time. This included an extended fecal-eating sequence featuring the only color used in the film: brown. That, if you can believe it, was far from the worst thing.

Harvey’s wordless performance is surprisingly effective. Short, fat and weak, he breaks all the clichés, yet is still able to convey supremely disturbing depths. The notable lack of dialog throughout most of the movie works to bring the audience closer to Martin than they’re likely to be comfortable with.

Considered only as an exploitation/torture-porn film, this is worlds better than the first. Correspondingly, it’s also vastly less likely to be accepted by any particular audience. During our screening, for example, my wife physically gagged several times. The first movie was more bark than bite, this one is all bite. Bloody, shit-soaked bite. 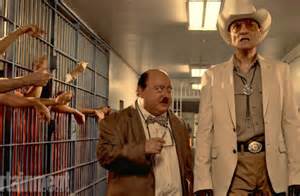 The final film aims to be a parody of itself and fails utterly. It brings back Dieter Laser as the redneck – yet somehow thickly German accented – warden of a Texas prison. Laurence R. Harvey also returns, this time in a speaking role, as the Warden’s cowardly toadie. Also returning is the plot hook from the second: this time the first two films inspire a copy-cat to create a new program for controlling problematic prison populations.

Tom Six also writes himself into the movie, as well as several references to the amazing popularity of his films, his handsomeness and his broad cultural impact. He comes to the prison to share his research proving that “centipeding” is “100% medically feasible”. With that indisputable stamp of approval, the warden approves the program to be applied immediately to all 500 prisoners.

The movie is happy to place its fate almost completely in the questionable hands of Laser. His over-the-top-of-the-top delivery makes every line – even those few you can understand – completely ridiculous. For his part, Harvey actually acquits himself well. He’s not a great actor by any means, but in comparison to Laser, he’s every Oscar winner ever. The film also drags Eric Roberts [IMDB] in because, let’s face it, he never turns anything down.

(It strikes me that a casting switch may have saved this somewhat. Using Harvey as the deranged warden and Laser as a psychotic prison doctor would have played to the strengths of each and allowed them, in a way, to reprise their earlier roles.)

There’s nothing redeeming here at all. It attempts to be more shocking than the second, but is too scattershot, immature and puerile without ever being truly disturbing. It desperately tries to leverage whatever esteem fans of the earlier films may have, but it is so vastly different in tone and delivery that it fails completely.

While there are only three films, all from the same creative team and exploring the same general idea, it’s difficult to imagine three movies more different from one another. The first is polished and clinical, the second raw and bloody and the third just plain dumb as the shit it celebrates.

Considering just the intended effects the second film would have to be highlighted as the best of the three. Its sheer lack of inhibitions makes it, by far, the most difficult to watch, yet it’s clearly the most successful of the three. The first is too pretentious and tame; it simply doesn’t live up to expectations. The last is a complete waste of time.

Condemning these films because of their content is easy, but misses the point. The movies are experiments in extremes, pure and simple. Extremes of disgust and alienation rather than love, dedication or any number of more widely acceptable themes, but extremes that a certain audience is willing to explore.

I fully expect Six to return with a “Second Sequence” as soon as he can scrape enough money together to do so. If he embraces that small, but discerning, audience as he did in the second film it may even be worth it. If he continues down the ridiculous, scattered path blazed by the third, it won’t be.