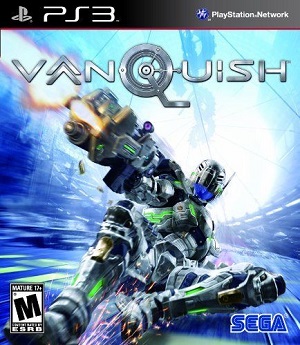 Vanquish is yet another game that I found only because of my PS Plus subscription. I download all those free games and then promptly forget them. Later, when trying to reclaim some disk space, I wonder what they are and fire ’em up. Sometimes I find gold, sometimes not. This one was was all gold.

The plot is a mishmash of old “24” plots and Tom Clancy fever dreams. The United States has constructed a massive space station designed to both house thousands of people and transmit collected solar energy back to Earth. Russian extremists invade the space station and turn it into a weapon. They sterilize San Francisco from space then turn their attention to New York City.

As Darpa agent Sam Gideon you must use an experimental augmentation suit and work with both the elite Bravo Company and the remnants of the station defense forces to take back control; preferably before New York enters the cross-hairs. Your suit gives you enhanced speed, strength, a bullet-time mode and an extended rocket-assisted butt slide that’s, pun noted, a blast to use.

Scratching the surface, it’s a standard third-person shooter. A cover system, multiple upgradable weapons, allies, collectables, huge bosses and even larger set pieces: in other words, the works. All the standard missions are accounted for: straight frontal assaults, snipe-heavy sneak segments and (surprisingly palatable) escort missions. Dig deeper and you’ll find something sadly missing from the genre for the past few years: fun.

The combat is fast and over-the-top. The controls take some getting used to, but are loose with a nice, comfortable margin for error. Weapon selection includes the expected fare, but also some unusual options that keep things interesting. The satisfying weapon upgrade system encourages players to give everything a try. Finally, what the simple melee system lacks in depth, it makes up for in sheer style.

The story is hokey, the characters cliched and the acting ham-fisted, but all with a self-awareness that makes forgiving easy. It’s supposed to be hokey, cliched and ham-fisted, after all. This is a political thriller set in space with giant robots: it shouldn’t, and doesn’t, take itself too seriously. One small example: if you sit in cover for a moment too long, Sam will flip up his visor and enjoy a smoke.

Enemies are nicely varied and more than plentiful. Each is clearly designed with a specific strategy in mind, yet none are so complex that they can’t be dealt with some dedicated button mashing. The boss characters are enormous, multi-configuration monstrosities with contextually vulnerable weak points. Battles are punctuated with irksome, but simple quicktime events. Bosses make reappearances later (often in different combinations and greater numbers) allowing you to experiment with your updated weapons and leverage your experience.

The environments, ranging from from cramped hallways and labs to huge space ports and parks, are multi-leveled and intricately designed. Sam will often be fighting from moving trains and elevators or up slopes against entrenched enemy positions and failing debris. Some areas are riddled with destructible turrets or massive tanks, others are the target of wild aerial assaults and many play fast and loose with gravity.

Vanquish is nothing less than mech-anime come to brilliant life. Fans of Robotech, Gundam or The Transformers will feel right at home with the action and visual vocabulary. The game is paced amazingly well, but the short length (around six-to-eight hours) and lack of multiplayer may be seen as a problem for some (although not for me).

More than anything, this game is fun. Despite the seriousness of the story there’s a simple joy in the execution and design that sets this well apart its gloomy, melodramatic peers. Hell, even the end credits are fun! The development team is introduced, photos and all, in a first person Asteroids-style shooting gallery. From the sales figures it appears that I’m far from the only one that missed this one when it was released and that’s a terrible shame. This is one game that definitely deserves more attention.