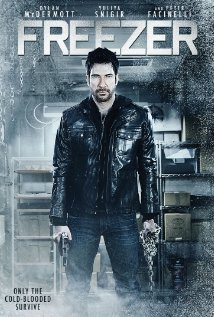 Call them what you like – bottle movies, gimmick flicks or just plain “single location films” – they are an inherently mixed bag. Completely dependent upon the audience being intrigued enough by the single location and the few characters, they have to grab your attention early and hold it to the end. This one does pass that test, but only barely.

In this case, three Russian gangsters have apparently mistaken Robert (Dylan McDermott [IMDB]) for somebody that stole millions from them. In an attempt to make him reveal where the money is before their brutal boss finds out they’ve lost it, they toss him into the titular walk-in freezer. He has full run of the freezer while alone including, laughably, its many meathooks.

McDermott is a fine actor, but his character doesn’t lend himself to sympathy. He’s snarky, proud and kind of a douche-bag. He never seems worried about his situation; perhaps he’s a little annoyed, but never afraid. If he’s not worried, why should the audience be?

The gangsters cover all the bases: there’s a beautiful seductress, a muscle-bound pounder and the twitchy, gun-toting, nervous guy. They pop in regularly to demand answers and make the situation worse. They take his shoes, his clothes and douse him with water. One huge problem is that the freezer never seems very cold. Simple cues like fogging breath and frost never make appearances.

More importantly, the movie has trouble building suspense. For various reasons Robert is rarely alone. With the exception of the, you know, being locked in a freezer thing, most of his immediate problems are actually solved rather quickly. There’s never any chance for he or the audience to build any real sense of dread or hopelessness.

All of this is topped with a twist-ending (that’s the way you know that this is a good movie, dontcha know).

This is, technically, a well-done film with some nice performances from some familiar faces. Unfortunately, a thriller with no thrills just doesn’t have much more that can be said for it.