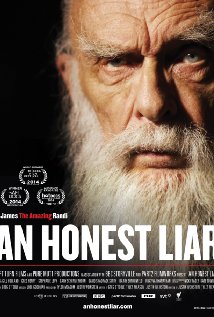 A year or two later he visited the area again, this time coming to Tufts University. The same friend drove us through an unseasonable blizzard to the venue. Although I lived nearby, I had never been to the Tufts campus and we became woefully lost. Finally finding the right building, but absolutely sure we had missed our chance, we entered the hall to find… about eight other people. The worsening weather had kept nearly everybody away.

Surprisingly, it didn’t keep Randi away. He graciously agreed to go on for his unexpectedly tiny audience, all of whom sat bright-eyed in the front row of a huge, otherwise empty, lecture hall. He proceeded to give one of the most enjoyable talks I’ve ever had the pleasure to attend. He was vibrant, energetic and clearly made every effort despite the paltry turnout.

The formal talk ended with a Q and A session that, considering the audience, slid gracefully into an extended conversation featuring impromptu sleight of hand by the master magician. Randi, then in his late 70’s, never showed the slightest sign of tiring. If anything, he became more energized as various topics peaked his interest or reminded him of favorite stories.

This documentary captures Randi’s life and spirit and highlights his many passions. It begins in his early days, mastering his skills as a magician and escape artist. He emulated, and in many ways surpassed, his idol, the great Harry Houdini. He was a celebrated performer with a global reputation.

Like Houdini, who spent his later life fighting against frauds and mediums, he found himself in contention with those that would use his craft to take advantage of others. The film walks us through Randi’s work debunking charlatans and cheats, the “dishonest liars” that he, rightfully, holds in high contempt. His work eventually led him to create the James Randi Educational Foundation which continues to offer a million dollars in prize money to anybody that can provide proof of a paranormal power under controlled conditions.

The last section of the movie deals with his personal life and the particular challenges that he’s faced, and overcome, in the past decade. In many ways, it’s the most engaging segment, as we see Randi at his most vulnerable, but it may also unintentionally mute the rest of the film.

That one, only potential, negative aside, this is a deeply fascinating look at one of the greatest personalities of two centuries. As my introduction may have indicated: I am tremendously biased in favor of this man. I can’t recommend learning more about him enough.