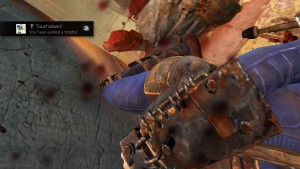 I got blowed up, and my PlayStation decided to reward me for it.

I continue my play diary of Fallout 4, but at a slower pace. Like any self-respecting gamer, I took a week off to enjoy Fallout 4, but that week is over and I’m back at the J-O-B now.

I dove into The Brotherhood of Steel quests today. I’m leaning towards not joining when asked. I like the Brotherhood, but I’m not in like with them, if you know what I mean.

I’ve taken to holding off on taking my perks in case I need an extra boost during the campaign. This resulted in me talking another rank of “Hacker” because I just had to see what was on that computer! Spoiler: nothing. Nothing at all.

A Quick Word about Bobby Pins 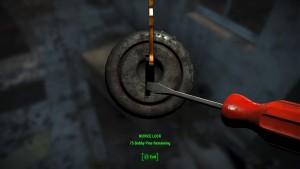 Yup, that one’s going to break too.

It’s become amazingly clear to me that Bobby Pins now have, and remember, durability. The result of this, in my experience is that I seem to always immediately break a bobby pin when starting on a new lock. It feels like every single time!

I can’t think of a way to fix it. It’s not really broken, but it just feels bad. Like a little slap in the face every time I innocently want to steal some long-dead office worker’s lunch. 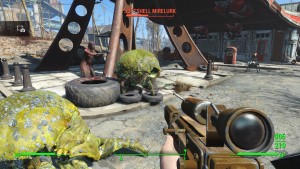 After visiting my robot buddies at Greygarden, I decided to finally check out that pesky radio signal. I dragged my good friend Piper along because she’s the curious type and I thought she’d enjoy it. We went the long way around and found a nice little gas station. Apparently, a couple of mirelurks, hidden in the dirt, also found it.

I was surprised to see Mirelurks so far from the water. I guess that’s a thing now. I’m also just a little tired of crap hiding in the ground: molerats, mirelurks, radscorpions and probably others as well. The name of the game seems to be “surprise” this time around. Anyway, Piper and I dealt with them, and started looting the station. We got quite a surprise when the wandering group of super-mutants showed up, apparently attracted by the noise. The suicider with them cornered me in the back of the office and killed me very dead (but I did score a trophy for it). 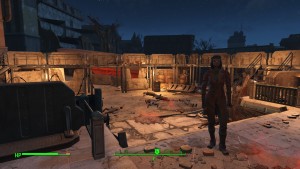 I was right! Piper had a hell of a time!

Upon reviving, I decided to take the more direct route through college square and it’s many, many ghouls. It was rough, but I’m convinced that “College Square” is “Harvard Square”. I’m still (trying) to play a sneaky, methodical assassin. The game continuously takes issue with my plans. Ghouls, like everything else, tend to pop up without warning.

As we approached our goal, the Cambridge police station, we saw our Brotherhood of Steel buddies taking on many, many more ghouls. They didn’t really need our help, but we helped anyway. When things quieted down, we headed in and got the low-down from Paladin Danse. They need a new transmitter! It’s in the ArcJet building! They need my help! 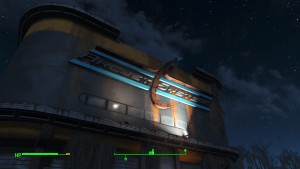 ArcJet for all your… arcing jet needs?

Honestly not sure why they need my help. I followed Danse, as instructed, but could barely get a shot off before the big guy took out everything that popped up and said “Boo!” Unlike previous games he also seemed perfectly happy to go along on his merry way without me. We’d clear a room, I’d start looting or reading a terminal and then I’d hear laser fire from down the hall. After a while I just let Danse do Danse.

When he told me head deeper in while he “covered our backs”, I fully expected to be in for some nasty solo action. That wasn’t to be the case as there was only a single small suite of rooms left. The areas that I’ve been dealing with lately feel much more “traditional” in size and scope than the damnably huge Corvega plant. I was able to restore power to the systems, snag a fusion core, and return to the test chamber where Danse was fighting a large herd of synths. 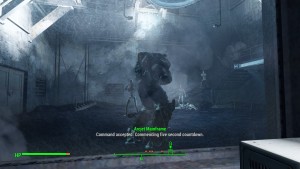 There’s the big lug himself.

(As an aside: is it striking nobody else as odd that you get down the basements of these building, find a huge piece of infrastructure, take the fusion core from it and… one small light goes out?)

Up the elevator, through a handful of synths and we had our prize and were out! Danse gave me a sweet laser rifle and offered to let me join the Brotherhood, but I politely brushed him off with an honest “I have to think about it.” I’ve started the groundwork of a romance with Piper and I’m not sure how she would feel about me joining up. On one hand, she clearly doesn’t have any love for synths; on the other she clearly doesn’t have any love for secret organizations that think they should control all technology.