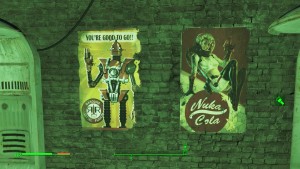 I continue my play diary of Fallout 4. I spent my time in Covenant this session, completing the missions there. It’s a good introduction to the controversy and paranoia about synths and the lengths some people are willing to go.

On the personal growth front, I perked my Charisma up to level 6. This will finally allow me to take the Local Leader perk and set up some supply lines between my annoying settlements! Except that when I reached the next level, I couldn’t resist and took the second level of Gun Nut.

After all of my adventures in Covenant, I was feeling under-powered on the weapons front. After spending some time at the bench with my new perk, I ended up with a pleasing little arsenal. 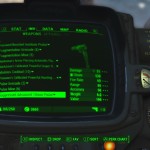 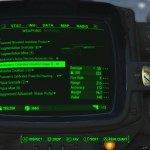 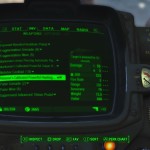 In addition I beefed up an automatic rifle with armor piercing capabilities for those times when you just need to spray’n’pray. It also uses the extremely plentiful .38 ammo. Lastly I tacked a few enhancements on an Institute pistol I picked up someplace. With a damage of 30 and a decent fire rate, it’s fine backup for when 10mm ammo runs scarce.

I’m still not completely understanding the mod system. I’m fine with improving and altering weapons, but am not sure how to then apply those mods to other weapons. For example, I found a decent pipe rifle with an awesome night-vision scope. I couldn’t for the life with me figure out how to get that scope onto another gun. More experimentation is required, I guess.

What I did discover is that all of the old mods I’ve made were apparently saved in my inventory and that they were both very heavy and quite valuable. Perhaps it was a mistake, but I sold them all off to buy screw-, oil- and gear-infused junk and gain back about 30 carry weight.

I headed back to give Covenant my complete attention. Before I could enter, the gatekeeper, Swanson, insisted that I take a oral exam, the SAFE Test. As I was unable to talk him out of it, (even in my fancy clothes!) I submitted.

Once I got in, Covenant was a pleasant enough place. The rusty workbench against the wall told me that this lovely walled community surrounded by turrets could be mine, so I started the rounds. 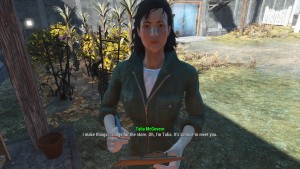 Such a cutie! I’d sure hate to have to kill her later!

I began with the first named person I saw: the cute, but twitchy, mechanic, Talia McGovern. She gave me such a strong Kaylee-from-Firefly vibe that I liked her immediately and wanted to be besties. She was clearly nervous about something related to synths, but she clammed up before I got any real dirt.

Next I ran into Honest Dan, a mercenary-slash-detective looking into the disappearance of a missing caravan and the daughter of the caravan owner. He’d traced the caravan to Covenant and was convinced the townspeople knew more than they were saying. He enlisted my help, because the one thing every good investigation needs is controlling input a total stranger! 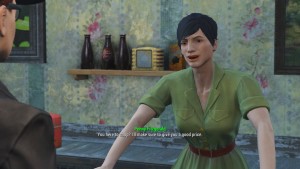 Some of the models look a little… off.

I hit the townsfolk, one by one. I got a nice can of lemon-less lemonade from a sweet, stupid robot. The shop keeper, Penny Fitzgerald, was both especially helpful and incredibly weird looking. It was like she was made of wax and had started melting. She was so odd, compared to the other characters, that I began to suspect her of being a synth based on looks alone. In the end, I found I what I needed on a hacked terminal in the office.

Covenant, it seems, was a front for a secret, nearby research compound. Dan and I headed out. 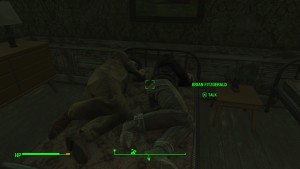 Apparently one of the secrets of Covenant is that Penny’s husband , Brian, is sleeping with Jacob Orden.

Once we got there we discovered that these people had designed the SAFE Test to determine if a person was human or synth. They were capturing travelers and suspected synths and torturing them to research its effectiveness. The doctor in charge had a real “mad scientist” look about her, so I took the side of the synths. It meant we had to fight our way out, but Codsworth loved the hell out of that decision. He now idolizes me completely. 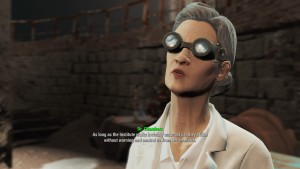 The whole thing left very confused about the synth situation. If they’re truly indistinguishable from humans – even with medical testing – then they’re clones (or close to it), right? If they’re robots covered in flesh, a la The Terminator, then it might be impossible to tell them apart from humans at a restaurant, say, but should be pretty damn easy if you’re willing to torture people. It seems like they may be trying to play both sides of that fence and I’m not sure how effective they’re going to be.

In the final analysis, I tend to agree with Dan, who said, as we released a suspected synth: “If they could do all that to her and still not tell if she was human, then she’s human enough for me.” 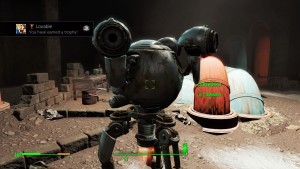 I know which way Codsworth would prefer I decide.

My current inclination, based on the brief introduction to synths that we got in Fallout 3’s “The Replicated Man” quest set, is that synths are people. I’ll likely be siding with them as the game progresses. There’s a minor muddying issue clouding this decision: every synth I’ve seen so far has immediately tried to kill me.

Next time I’ll be returning to Covenant to see what options remain to me, if any, there. I’m also thinking, now that I have all this wondering matching security armor, that my settlers at Sanctuary Hills might like some updated wardrobe.