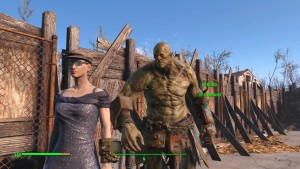 My new chit-chat suit. Strong, my eyes are up here!

I continue my play diary of Fallout 4. I’m making progress even with TV access limited by family holiday visits. As I promised, I finally rescued poor Nick Valentine. He had been waiting for the better part of an (in game) year, but didn’t seem any the worse for wear. I immediately began ignoring him again.

I did some spring cleaning of my gear and created a new high-charisma talky-chatty suit. With Agatha’s Dress, a jaunty newsboy cap and some fashionable glasses, my Charisma is boosted to 12 for those important persuasions. I also did some minor improvements to my armor and weapons.

I spent all those perk points that I had stockpiled on day 21. Firstly, I finished off settlements by taking two ranks of Cap Collector (allowing me to build emporiums) and the first rank of Medic (allowing me to build medical facilities). I also upped my Luck to six and purchased two ranks of Better Criticals as my criticals were feeling a little anemic. Later, when I reached level 51, I added another point to Endurance.

There is a Chance I May be Overpowered

Heading so far down the settlement path and ignoring the main story brought me to level 50. This may have made me ever so slightly overpowered. I’ve been carrying around Kremvh’s Tooth, an arcane dagger I retrieved from Dunwich Borers back on Day 20. It does 47 points of base damage, plus additional poison and bleed damage. Since I’ve taken rank four of Sneak, a hidden attack does an astounding 10x damage. Let’s see what that does to, say, the mirelurk queen that ambushed me in Statehouse:

Yup. Two hits. Me hitting you and… me hitting you again. I’m confident that anything less than a behemoth is now a one-hit kill. Granted, the situations in which I can put this to use are relatively rare, but doesn’t it feel like this was planned as a much more epic battle? 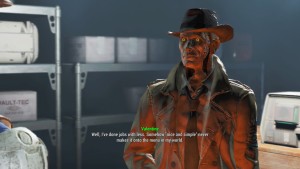 As I mentioned, I finally headed down to Vault 114 and – hey! – Nick Valentine’s an honest-to-goodness rowbit! I had been assuming that he was a pre-war ghoul, but a synth is just as anachronistic: neither are welcome in Diamond City. I didn’t stay with him long enough to get any more information, but I’m curious how he was able to win his place there.

It was odd to see Park Street Station given such an underwhelming treatment. In reality, the station is the hub of the entire system and one of the very few multi-level stations in Boston. It seems like there could be some balance between the miles of tunnel in Fallout 3 and the small, utterly generic stations seen here. 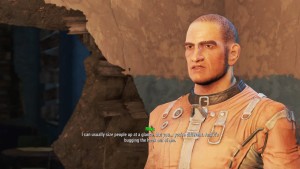 He’s a dick, but you don’t have to like him.

During the mission to find Nick the settlement quests that I previously refused to turn in magically completed themselves. This left me with only a few outstanding quests on the list. Why not knock them out?

I started by committing to the Brotherhood of Steel, whom I had left hanging way back on Day Six. I’m not wholly on board with their “kill everything that’s not like us” philosophy, but you do have to admire their dedication. I did a few of the fetch-and-clear missions given by Scribe Haylen and Senior Douchebag First-class Rhys. It wasn’t long before Danse was requesting that I investigate what had happened the previous recon team; something I already did on Day 15. So, yeah: instant Brotherhood Initiate. Suck it, Rhys. 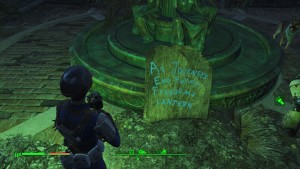 Next, I went to find The Railroad which meant following the Freedom Trail. This was amazing to me! By way of explanation, the first web site that I ever created was vboston.com. It’s gone now, but you can revisit my youth via the Internet Wayback Machine and see my online version of the Freedom Trail from 1998. Yes: I’m a Freedom Trail groupie.

I misunderstood the quest at first. I assumed that I needed to actually enter each of the locations and do something there. It was only after exhaustively exploring the Statehouse – and its many terrors – that I realized that the clue was actually in the marker on the street, not in the building. The trail in the game is much smaller than the actual one and I made short work of navigating the full length of it. 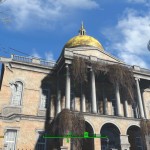 The New Statehouse: where bandits and mirelurks work together for a crappier tomorrow. 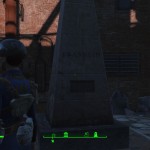 The final resting place of Benjamin Franklin’s parents (he was born in Boston, but was buried in Philadelphia). 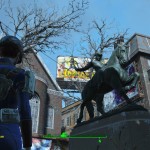 Paul Revere’s horse! And some guy!

The trail ended at the Old North Church (instead of The U.S.S. Constitution as it should) and I invaded the catacombs to solve the riddle and meet The Railroad. I know that these riddles can’t be too hard (because idiots like me need to solve them), but this one struck me as particularly easy all the same. 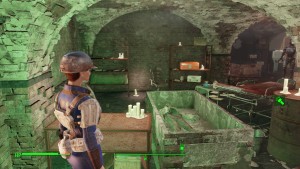 Does nobody ever clean in the apocalypse?

To prove myself, the Railroad sent me to retrieve some lost tech from their former headquarters, now overrun with synths. Easy. Returning triumphant, I was invited to become a railroad agent and was shown around the headquarters. They apparently moved their gear in around the decaying corpses and piles of garbage. I was sent to Bunker Hill on my first mission.

The presence of a workbench at Bunker Hill demonstrated that the game wasn’t done with handing out more settlements. I got played by a child con artist and argued with a bartender. Climbing the monument nets you a magazine (I was expecting a bobblehead). From the agent I was told that the mission was securing a transfer point for a newly freed synth and then escorting him to a nearby safe house. I’d usually roll my eyes at an escort mission, yet it was actually a breath of fresh air: something other than running to a location and killing everything! 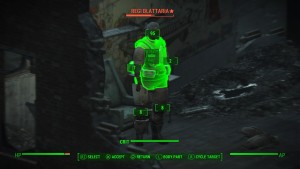 Regi looked like a man with something to say. Looks are deceiving.

I enjoyed this quest. There are very few “scripted” settlements to explore, likely due to the huge number of “generic” settlements that are available for the player to develop. In Fallout 3 we enjoyed chatting with the people of Megaton, Tenpenny Tower, Arefu, The Republic of Dave, The Family and several others. There were even more available, across several factions, in New Vegas.

This complaint extends to many of the random NPCs as well. When heading to the former HQ, for example, I ran into a character named “Regi Blattaria” who lived in a bombed-out building with a small army of radroaches. We met, we fought, he died. No dialog at all. Fallout 4 seems to live by the rule shoot first, never ask questions and I miss talking with people! 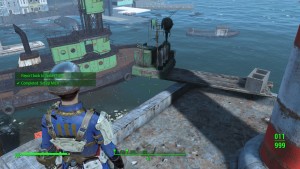 Tinker Tom’s sensor station. I’d make of the fact that it’s being held up by a single cinder-block, but I did carry it here in my pocket.

Returning to The Railroad, I headed into radiant quest territory. The first line, managed by Tinker Tom the paranoid technical genius, had me climbing tall buildings to plant sensor stations. The second line, given by the uptight, egotistical second-in-command (I just smell double-cross) is to check out former safehouses and determine their status.

I detoured a bit, since I only had two miscellaneous quests. The first, “Pay Marowski 2,000 caps” will likely be permanent: I killed Marowski in his sleep when he demanded the money. Selecting it offers no map location or instructions, so I’m considering it glitched. The second, “Investigate the Museum of Witchcraft”, seemed more achievable. That is, until I was sucker punched by the albino deathclaw wandering around inside. 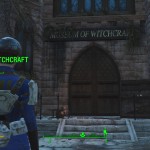 Clearly, this will be all rainbows and kittens. 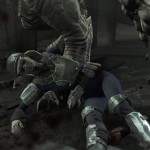 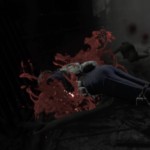 I solved the deathclaw problem with strategy (which can be read as “big ass pile of mines”) and found a deathclaw egg – a pristine deathclaw egg, in fact. I was given the chance to return it to the nest, but I felt that more deathclaws might be a bad thing. Instead I sold the egg to a douchebag robot in Diamond City (after speech checking him up to 500 caps for it). I’m now worried that I might have missed out on some kind of deathclaw perk…