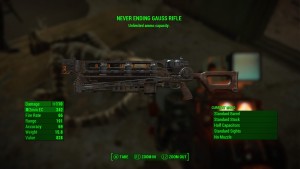 Now my Gauss Rifle never needs to be reloaded. Ever.

I continue my play diary of Fallout 4 on PlayStation 4. I finished with the Railroad (or, more specifically, they stopped giving me missions) and spent some very frustrating time trying to make my ungrateful settlers happy. I gave up trying. Jerks.

I’ve also decided that things have been a bit too easy, so I upped my difficultly level from “normal” to “hard”. I haven’t seen a huge difference in gameplay yet, so I may bump things up to “very hard” soon. One thing that might have been affected is the quality of legendary drops. My first one after making the change was a “Never Ending Gauss Rifle”. This little gem still consumes ammo, but never needs to be reloaded. As soon as I could, I replaced my standard gauss rifle with it.

Two more levels today. I took the third rank of Strong Back allowing me to run when overloaded (at the cost of Action Points). I had planned on taking the last rank next, but got side-tracked back into settlement-ville and, to support an experiment I’ll explain below, raised my Charisma by a point to eight. 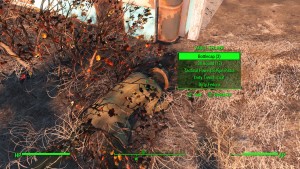 What an undignified end!

Last time I told you how I discovered my buddy, the 200-year old, ghoulified Vault-Tec Rep over at the Rexford Hotel. He hadn’t had a happy apocalypse, but seemed to perk up considerably when I suggested he join my settlers at Sanctuary Hills. He assured me that he’d migrate there and I left him, happy to have brightened his day.

Weeks later, he still wasn’t there. I’m embarrassed to say that I forgot all about him. Then, when I was putzing around Sanctuary trying in vain to raise happiness, I found him – what was left of him, at any rate – decomposing quietly in the bushes outside my old house. I’m still surprised that he could die.

It occurred to me that 1) he deserved a more suitable resting place and 2) perhaps one of my settlers happiness issues was the existence of nearby corpses (this being an issue in the “Fallout Shelter” mobile game). So, killing two birds with one corpse, I solemnly carried him (by the butt) up the hill and laid him (clumsily) to rest (in a Christ pose) on the hatch of Vault 111. It seems fitting to let him rest forever on the Vault that refused him entrance.

Charitable contributions in his name may be sent to the Diamond City Security Widows and Orphans Fund. 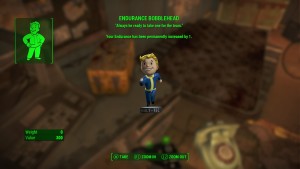 I can wait, like hours, to go pee now!

I’ve reached a point where The Railroad isn’t handing out quests any longer. I cleared University Point, which had some nice gear and a sad story attached, and then did the sixth and final Randolph Safehouse mission. That entailed clearing out a large, but not particularly well-populated, Poseidon Energy facility. The raiders there were hoarding the Endurance Bobblehead and a Tesla Science magazine. The Railroad rewarded me with the Institute Killer Weave, which gives a moderate damage bonus against synths. 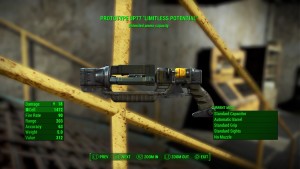 I spent most of my time attempting – and failing – to puzzle out the “happiness” system for settlements. Most of my settlements are hovering near the 80% happiness mark. This seems odd since only my larger settlements have a full complement of shops. Shouldn’t those be higher?

I went to work on Sanctuary Hills, my most developed settlement. I already had an “emporium” version of each shop, a restaurant and a surgery center. There’s plenty of water and food – at least twice what’s needed – and every settler (although it’s damn hard to be sure) has a job assigned. 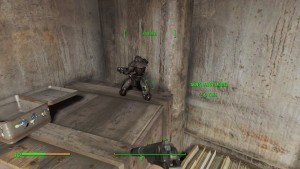 I got a sentry bot model from a lunchbox! My Mr. Handy model has a buddy!

One of the settlers complained about “the bed situation” and I assumed he was talking about the one bed that I had placed on the roof of my house so that I could fall asleep looking at the stars. I removed it and even constructed a new building so that the remaining beds wouldn’t be so close together. There are 20 indoor beds – actual framed beds, all with comfy pillows no less! – for the 17 settlers.

Guessing what do next, I started in on lights and extras. The bar and the shop areas are now very well lit and have cool jukeboxes to boot. The bar also features enough seating for the whole town. I put radios and lights near all the beds. On the off chance that pets might make people happy, I moved the junkyard dog I purchased from a wandering trader from Tenpines Bluff to Sanctuary Hills. I even upped my Charisma by a point thinking that the maximum happiness might be tied to it. Lastly, I poured on the defenses. Turrets now line the streets, the backyards and river banks for just under 300 total defense. 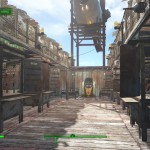 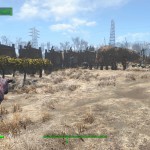 We’ve got your standard two-headed cow and more than enough food and water for everybody! 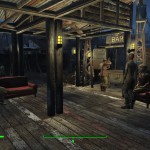 Hard day in the field? Just sit back and relax! 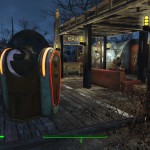 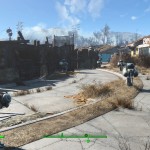 You’ll not only feel safe in Sanctuary Hills, you’ll be safe! 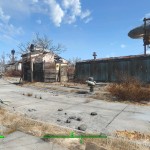 Our automated defenses are second to none!

And… nothing. After all of that work the Happiness level at Sanctuary Hills skyrocketed from 79 to… 81. Eighty-one. As in “just a whisker above four-fifths of full”. 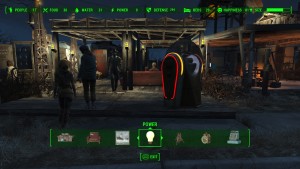 I’ve given them everything and what do I get? 81.

I have no idea what else to try. If I bump my Charisma up to ten, I could add a few more settlers to the population, but I’m having trouble seeing how that could matter when I have settlements with only five or six people that have 80 happiness.

I fear that missed something very obvious. Do I need to finish more of the main story, perhaps? Does one of the “Picket Fences” magazines I’ve missed let me build a brothel?