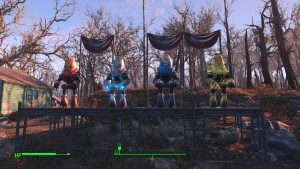 All the robots came out to help me celebrate!

I continue my play diary of Fallout 4. I reached level 60 near the end of my last session. As I did on Day 17, when I reached level 30, I’m going to take a few minutes and reflect on my current position and my thoughts so far.

I’m still working on, and mostly succeeding in, avoiding spoilers. With the initial rush of interest settling down, it’s become easier. The die-hard fans will continue forever, as always, but I’m able to research specific problems (it’s a fallout game: there are problems!) without too much risk of spoilers. Still, with my son playing and videos of my favorite Let’s Players piling up, I’m thinking getting through the story sooner than later may be wise.

Obviously, there will be spoilers ahead (although not as many today as usual)! 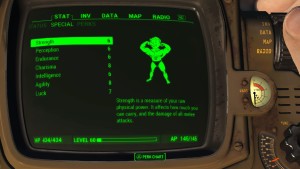 Between perk points and bobbleheads I’ve raised several of my S.P.E.C.I.A.L. attributes. Since level 30, Strength went up another two points and endurance three. Both are now 6. I bumped Charisma and Agility up a point each, to 8. Finally, Luck went from 4 to 7. 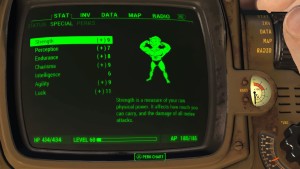 I went over my weapons and armor loadouts on Day 23. There have been some tweaks, but the basics haven’t changed. I’ve been favoring armor that offers bumps to S.P.E.C.I.A.L. and my stats are significantly improved when wearing it. Two “Lucky” pieces push my Luck to 11 and others raise Strength to 9. Every other attribute, with the exception of Intelligence is raised by one or two points. 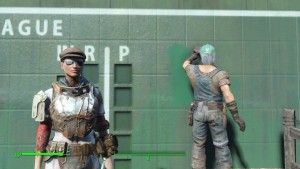 I did discover that I could apply Ballistic Weave to a Baseball Uniform, so why not?

I continue to play as sneaky sneaker that sneaks, but as I’ve grown in capability, I’ve gotten much more comfortable with raising a ruckus to get things over with quickly. I recently upped the difficulty to “Hard” to offset my awesomeness, but I may bump it up again.

In general scaling in the game feels “off”. Most of my, admittedly rare, deaths feel cheap. At level 60, most of the enemies I’m facing are still one-shot kills. Periodically, however, I’ll find a level 60 or 65 raider hunkered down with a group of level 10 or 11 ones. Or I’ll fast travel directly into the arms of a super-mutant behemoth or deathclaw. Or some random gunner that hasn’t even showed up on my radar just happens to have a Fat Man. 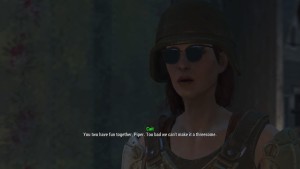 I decided to experiment and romance Cait; I’ve always had a thing for redheads. My main lady, Piper, didn’t seem to mind at all. So far the only indication that anybody has noticed at all has been some special dialog. I’m assuming this would the case no matter who else I decided to blow kisses at. Apparently the romance system in Fallout 4 is pretty damn simplistic.

In addition to the companion perks I’d already received from Codsworth, MacCready, Piper and Cait I also cozied up to a few others. From Deacon I received Cloak and Dagger, which  gives me even more bonus damage to sneak attacks and radically extended Stealth Boy duration. Hancock laid the mostly useless Isodoped on me, which fills the critical meter faster if I’m highly irradiated. United we Stand was a gift from Preston Garvey, which provides me with increased damage resistance and attack power when facing multiple enemies. Finally Strong, as you might expect, offered up Berserk. It’s useless to me, but if I wanted I could deal 20% more melee damage when my hit points are low. 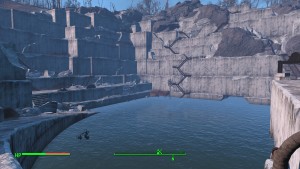 Sure, I’ll help you empty this. Hand me that bucket.

I did get in some wandering. Nothing important; just visiting some areas that I’d noted, but not explored or looked interesting. The first was Thicket Excavations, where a shady guy wanted help draining a quarry. His money was good and he didn’t try to murder me, so I helped.

When I returned the next day, the shady guy had called in some raider friends. Not only was the quarry completely empty (that’s some pump!), it also was fully fortified! Bingo-bango-boom! Dead raiders. 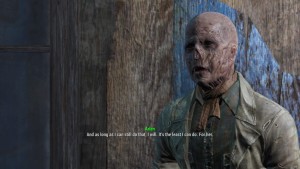 I made Arlen cry. It was great.

I also went through the Atomatoys offices where I discovered that Arlen the ghoul, besides being a workaholic, was a pretty sweet guy. I was able to find and give him a holotape of his family that survived the apocalypse. It’s was exactly the kind of moment that the game needs more of.

I headed into the C.I.T. Ruins, just to see what I could see. I assumed that finding The Institute wasn’t going that easy, and I was right. There was a very impressive battle between super-mutants and synths, so the trip wasn’t entirely wasted. Loot is always nice, but no signs of The Institute.

I also helped Nick clear out an old missing person case. Turns out the bartender of the Dugout, Earl Sterling, went missing. After collecting some clues, we tracked him to the Diamond City surgery. Turns out Doc Crocker botched a surgery and hid his body in the basement. Doctor Sun didn’t seem to be involved… but any doctor that considers a muddy hole in the ground an acceptable operating room has to have something wrong with them. 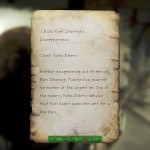 You’d think a machine might type up case files. 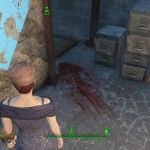 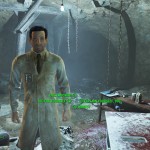 Well, I’ve looked around and l think you’re innocent, Doc… but I’m sure as hell not getting any surgery here.

I enjoyed this little diversion quite a bit and was sorry that it was the only one available. It’s the kind of quest I prefer, and they’ve been rather scarce in this outing.