I continue my play diary of Fallout 4 on the PlayStation 4. I continued to ignore my long-lost son and Danse came with, like the dim-witted, loyal, puppy-dog that he is. 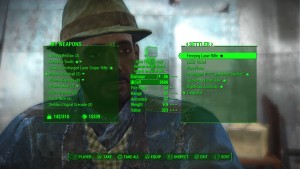 This guy is a straight up thief!

I began by cleaning house. I’ve been stockpiling loot, so did the fast-travel shuffle to sell it all. Danse didn’t appreciated the fact that I did this naked. It’s the easiest way to keep my wanted gear seperate. He keep telling me I was “out of uniform”.

In this process I noticed that some of my gear was missing! Danses gift, “Righteous Authority” and the “Limitless Potential” prototype, amongst others, were gone! I discovered that my settlers were straight up stealing from me! The local bartender (that bastard pictured) had no fewer than four of my legendary weapons on him! To think, I gave that bastard his job!

My adventuring earned me four more levels. I used the first two to finish off all five ranks of Rifleman. My non-automatic rifles now do 200% damage, ignore 30% of my enemy’s armor and are better at crippling. It’s not helped by the perk, but I also tossed a flamer barrel on a “Never Ending Plasma Pistol” to create an exceedingly nasty little number. 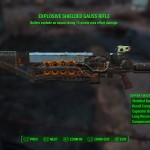 My gauss rifle now does 409 damage, plus a bit of explosive AOF. That’s over 1700 damage on a sneak attack. 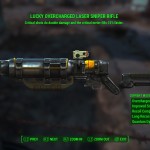 My Lucky Laser Rifle does 144 damage (double that on criticals), but ammo is much more common. 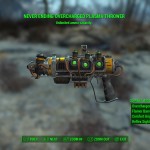 Who wouldn’t want to shoot a never-ending stream of green fire from their hands?

I also took the second rank of Critical Banker, allowing me to have three criticals on tap. It’s come in handy. Lastly, I took the first rank of Grim Reaper’s Sprint. V.A.T.S. kills now completely refill my action points 15% of the time. As a heavy V.A.T.S. user, this is one of my favorite perks from previous games. I’m surprised it took me so long to take it here.

Is Randall a Wizard? 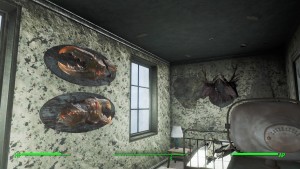 Objects in the game fall into two broad categories: those that existed before the war and those that only existed after. The game never seems to know the difference. For example, visiting both University Point on Day 24 and Cambridge Polymer Labs on Day 29 revealed labs that had been sealed tight since before the war. Search containers in such locations and you’re likely to find raider armor, molerat meat, tatos and other decidedly post war loot. 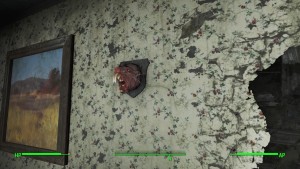 It’s a minor thing, easily ignored… but then we come to the Sandy Coves Convalescent Home. This is a pre-war nursing home. Randall was one of the patients and apparently quite the hunter in his youth! His room is decorated with trophies… of animals that didn’t exist when he was alive?

There aren’t many reasonable explanations, but there are quite a few unreasonable ones. Did some wastelander sneak into the home and painstakingly replaced each of the trophies with “modern” equivalents? Was Randall a time-traveler or a wizard? Was the war was so big that even dead animals mutated?! 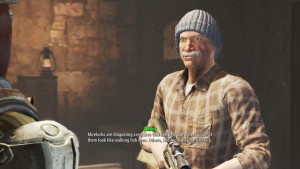 Barney’s my kind of people.

Before Danse and I left to search for an Institute courser, we were called in to help defend the Coastal Cottage. We did a weep of the coast on the way back. We came across the Rook Family House and the last surviving member of the Salem Volunteer Militia, Barney Rook.

He asked us for help controlling the mirelurk population by activating his network of defense turrets. This was a bit of a scam, since we had to kill all the mirelurks to reach the turrets, but hey – mirelurks dealt with, right? We were rewarded with an issue of “Guns and Bullets” and Barney’s special, Mirelurk killing sniper rifle, Reba II. 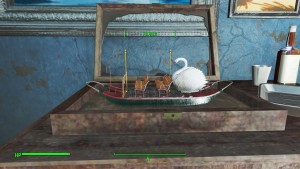 On the way out of Salem, we ducked into the Sandy Coves Convalescent Home, which I discussed above. A group of synths ambushed us there, but regretted the decision. The place was a nice little scavenger hunt for the keys needed to open the residents safe deposit boxes. I did find it odd that every box was filled with drugs… I thought nursing homes provided those?

Heading South we cleared both the Crater House and the Kingsport Lighthouse of crazy people armed with gamma guns. It made me think that I should probably carry a hazmat suit with me, just in case. The lighthouse also became my 28th settlement. By my reckoning. that’s… about 25 too many. 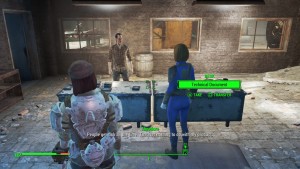 Moving further South, we came upon Longneck Lukowski’s Cannery and met Rylee, a trader, and Theodore, the owner of the place. Rylee was having trouble selling Theodore’s canned meat as people were getting sick from it. I was able to convince her to work for me and sent her to the Red Rocket Station. She never showed up. It’s been well over a week, and no Rylee.

I’m a nosy bugger, so I started poking around. I discovered that Theodore was padding out his meat with ghoul flesh! No wonder people were getting sick! He made the mistake of trying to shoot me when confronted, so I removed his head from his torso. Then I took all his stuff, including his Barter Bobblehead an an issue of Tales of a Junktown Jerky Vendor issue, both of which improve prices at vendors.

Turning West, we headed inland and came across the Malden Middle School, which, it turns out, is the front door to Vault 75. 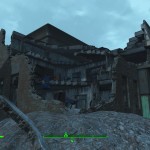 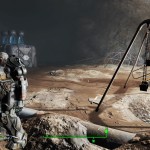 At least the kids got a playground. 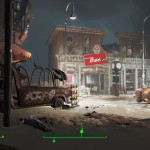 This killing arena is kind of a playground, I guess. If you squint. 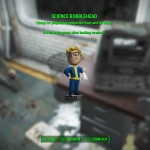 Bobbleheads just aren’t what they used to be. 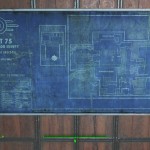 Vault 75: Welcome to your hell.

Here Vault-Tec worked to create a master race by torturing children. Those that failed were murdered and burned, those that succeeded had their DNA harvested… and were then murdered and burned. If you were lucky enough to be the perfect blend of weak, smart and spineless, you just might survive by getting a promotion to the science team!

Of course that’s the past. When I showed up, the whole place was infested with gunners. I did get the Science Bobblehead and its amazing perk: another try on terminals? Science sucks.

Moving closer to our goal (yes, we had a goal) we came across the Kendall Parking Garage, an unmarked location near the C.I.T. Ruins. It’s a small area, but notable for the pants-crapping crazy lady inside that spent her time strapping high explosives to, and having sex with, molerats. 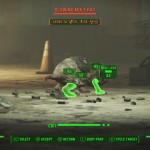 I mean why wouldn’t you do this?! 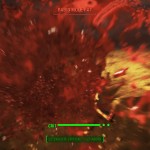 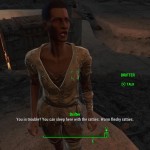 No. I don’t think I’ll sleep with the ratties.

Leaving the garage we followed the courser signal, as instructed by Virgil, to the Greenetech Genetics building. Entering the building, it was clear we were interrupting something as the place was crawling with agitated gunners. A public address system barked orders: the gunners were in a pitched battle with a courser. It seemed to me, at least, that we had similar goals in mind, but the gunners didn’t see it that way and started shooting at me too.

Reaching the top floor, things got eerily quiet. I was still convinced, at this point, that “coursers” were some kind of giant animal killbot. I was honestly worried about facing it. I assumed that once I entered the room I’d be trapped with a large, overwhelmingly powerful enemy and an extended battle. I was wrong.

Yup. Coursers are just guys. Kind of a let down.