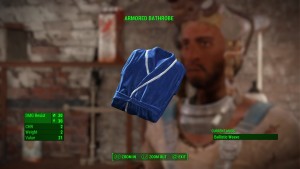 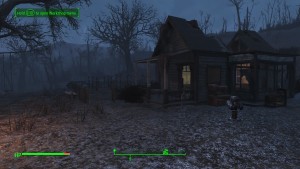 I found myself low on adhesive after the build-a-thon from Day 32, so made the rounds of my settlements to gather materials for vegetable starch. In doing so, I got pulled back into settlement quests for a short time.

The radio at The Castle even sent me to another new settlement. Somerville Place, in the deep South of the map, needed some help. I gave it. Now they’re my 29th settlement. How many more could there possibly be?!

On a positive note, I lived in Somerville – the actual Somerville, which is located North of Boston – for many years. I was disappointed that it hadn’t made an appearance in the game. This isn’t much of an appearence, but I suppose beggars can’t be choosers. 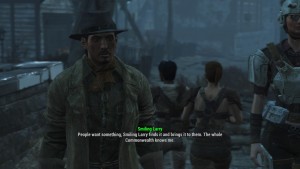 I need to put out an Amber Alert for Smiling Larry.

In what’s becoming a familiar story, I also found another wandering merchant that was willing to come work for me. Smiling Larry accepted my offer, just like Rylee did on Day 31. I sent them both to Sanctuary Hills and neither showed up. I waited, I looked, nothing. Well, at least I’ve not found their corpses in the bushes like I did with the poor Vault-Tec Rep on Day 24. I’m not sure how many of these freelance merchants there are, but so far the system is pretty horribly broken. 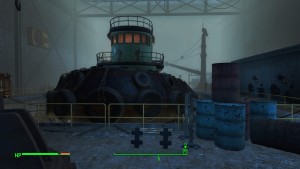 Impressive vessel you’ve got there, Rory!

As part of my criss-crossing of the Commonwealth, I came across the Irish Pride Industries shipyard and took a peek. The place wasn’t huge, but featured a dry-docked fishing boat situated above a significant number of Mirelurks. From a terminal I learned that the owner of the place, Rory Rigwell, was attempting to raise these “murkies” as pets. As you might suspect, it didn’t go well. Piper and I found his body amongst the eggs.

The wasteland is peppered with loot, gags and a surprising number of holes. I’ve found that I’m nostalgic for the fresh graves of Fallout: New Vegas. Sure, carrying the shovel around was a bit of a nag, but it did add something to the experience. 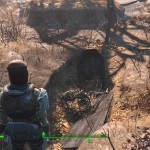 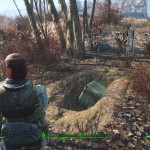 This little gem is just to the North of Abernathy Farm. 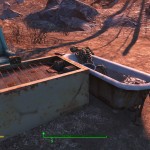 Is this some esoteric reference that I’m just not getting? 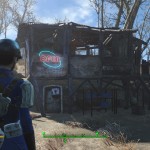 A little shop up on the North Shore that seems fine with the Mirelurk Queen that keeps showing up nearby. 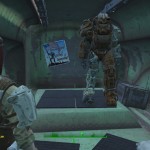 Power armor frame in a truck. The landscape is littered with these things. 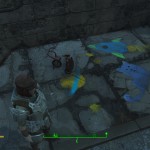 I’ve only scratched the surface, of course; Bethesda’s literally had years to drop weird things into the odd corners of this world. Since I was up North anyway and looking for easter eggs, I tried reaching the large, unnamed Northern island displayed on the map. I failed. 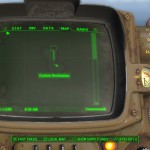 The island I was aiming for. 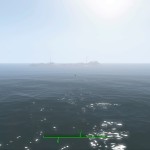 A view of the island from the Salem pier. 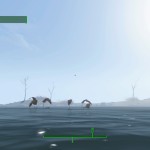 The dreaded “You cannot go that way.”

I do have to admit that the invisible walls in Fallout 4 have been, in general, less frustrating and more elegant than those in Fallout 3 or Skyrim. Even so, this case feels like simple teasing. 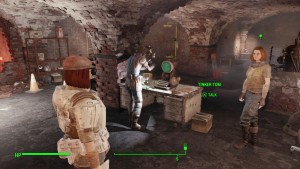 I did eventually reach Tinker Tom and let him use his weird little terminal to decode the courser chip. He got really excited by it – like too excited – but hey, I’m not judging! Pulling the code from the chip was important, but apparently only a small piece of the overall puzzle. I still needed to return to Virgil and get… whatever the hell he had to give me.

The first time I went to Virgil’s I entered the glowing sea from the North. I didn’t hit a single map location until the Crater of Atom. I’m not sure if I was just unlucky, or if the northern approach is really that barren, because the Eastern approach is littered with interesting things. 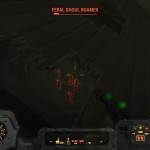 The Hopesmarch Pentecostal Church is mostly buried and infested with ghouls. 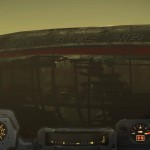 Skylanes Flight 1665 Wreck was a mess. 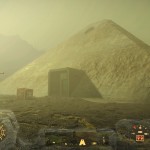 The ominous Sentinel Site leads to an enormous underground complex.

I also found some Vertibird Wreckage that looked promising but, despite a detailed search, contained absolutely nothing. The O’Neill Family Manufacturing site might have been a nice resting spot if it weren’t for the huge number of ghouls, radscorpions and those two Deathclaws. I may head back to some of these locations as I really didn’t find anything worthwhile. I’m sure I missed something. 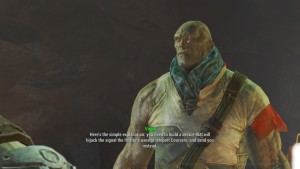 How could this plan NOT work?!

Approaching Virgil’s cave I had ample reminder of how much I really hate the Radscorpion’s ability to travel instantaneously underground. I don’t really have a problem with the burrowing in general, just the speed of it. Take a potshot at a Radscorpion from half-a-mile out and it’s biting your ass before you can lower the rifle. It just seems wrong.

I finally reached Virgil and he gave me some plans. Plans that he half-remembered from “things he heard years ago” and that were written while on super-mutant brains. I’m feeling positively wonderful about having the resulting machine disintegrate me!

I now have a choice to make. I suspect it’s “the” choice of the game: do I give the schematics to the Brotherhood, the Railroad or the Minutemen? Who do I trust most?