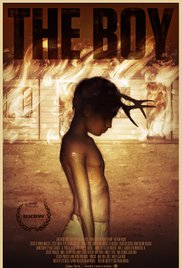 Motels are creepy. Alfred Hitchcock knew that in 1960 when he set his classic thriller Psycho [IMDB] in one. By their very nature they’re nowhere. After all, if you were somewhere, there would be a hotel, right? Motels are where people end up when they can’t get where they’re going. Motels are awkward, uncomfortable, and far from people or the hope of help.

It’s the summer of 1989. The Henley Motel, family owned for three generations, is slowly dying. All that’s left is John (David Morse [IMDB]) and his son Ted, the titular Boy (Jared Breeze [IMDB]). Ted is obsessed with two things: making his way to Florida, where he believes his mother has run off to, and death. To nurture the latter, he spends his time collecting (and creating) roadkill and tormenting the odd guest.

The performances are excellent across the board. Morse continues to be a rock solid addition to any project. Rainn Wilson [IMDB] is also impressive as a guest forced to stay at the motel due to a traffic “accident”; one that Ted becomes fascinated with. For his part, Breeze successfully captures the multiple levels of the character; engendering both fear and pity from the audience.

The movie asks a lot of its audience. It’s a slow, deliberate character study that some will likely find too slow. There’s relatively little dialog and a bare, simplistic score that underlines the loneliness of the environment, but also forces the audience to work harder to interpret events.

The movie is about anticipation, not action. It continually takes the audience to that rigid, quiet place right before something terrible happens; before the shoe that you know is coming, finally drops. You’ll spend a lot of time at that place and each time you do your stomach will be slightly tighter, your throat slightly drier and heart will beat slightly faster.