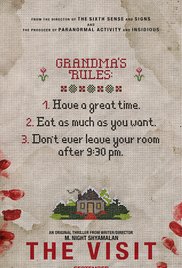 “The Visit” on IMDB

As unlikely as it may seem, somebody gave M. Night Shyamalan [IMDB] money to make another movie. His last offering, 2013’s After Earth [My Review] is a truly pathetic sci-fi film. Prior to that, he proved his inability to do fantasy with The Last Airbender [IMDB]. What’s a Shyamalan to do?

Scuttle back to thrillers as quickly as possible, apparently.

And not just thrillers, but found footage thrillers! Yes, found-footage! Shyamalan leaps into the genre that just won’t die with a fist full of the worst clichés it has to offer.

Katheryn Hahn [IMDB] plays a mother of two who’s been estranged from her parents since she left home at a young age. When they reach out, she agrees to send their grandchildren to them for a visit. Her son, Ed Oxenbould [IMDB], is a germaphobe and (more horrifyingly) an amatuer rapper. Her daughter, Olivia DeJonge [IMDB], is – wait for it – a budding filmmaker!

She films everything with her arsenal of magic cameras and immortal batteries. The clearly expensive cameras are, obviously, taken everywhere. Is it raining out? Better grab that DSLR! Going to play hide-and-seek someplace cramped and filthy? A wide-angle lens will absolutely improve that activity! Going into a dark place where you may need to defend yourself physically? Camera, baby, CAMERA!

Luckily, like all DSLRs, you can drop them on tile or concrete and they’ll simply settle comfortably into a dramatically applicable, fully focused, angled shot. They’re good that way.

It’s a shame. The so very tired clichés of the found footage genre hides a surprisingly decent thriller. It’s still cliché ridden – lonely farmhouse, precocious kids in danger and jump scares galore – but a fun slumber party movie nonetheless. Jump scares are easy, but they work. Even finicky horror fans will be pleased by a few more thoughtful elements.

This is Shyamalan, so there’s a twist ending, which won’t be spoiled. It was hamfisted, as always, but fine as far as it went. What will be said is that the story is vastly more disturbing without the twist. What might have a been a twisted story that hit too close to home for nearly everybody instead ends as a bizarre coincidence that shouldn’t worry anybody. Shyamalan has clearly and gleefully embraced could, not should.

It’s thoroughly, almost aggressively, average, yet still fun enough to recommend. It’s the sad truth that, as pedestrian as it is, it’s also Shyamalan’s best movie in years.