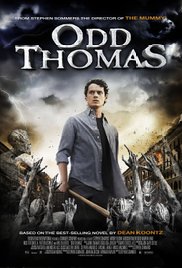 [Personal Note: my wife and I finished this movie and, as you’ll see, enjoyed it thoroughly. I began writing the review and, a short while later, learned that Anton Yelchin had died. Considering the subject matter of the film, this created some eerie sensations to say the least. He was a damn good actor and seemed like a damn fine human.]

Based on the novel of the same name by Dean R. Koontz [IMDB], this follows Odd Thomas (Anton Yelchin [IMDB]), who can commune with the dead and sometimes helps them wrap up loose ends. Odd (that’s his name, not a description) also sees demon-like creatures he calls “bodachs”. They feed on the pain of suffering that accompanies violent death. When his town is suddenly invaded by hundreds of the creatures, he knows that something terrible is going to happen. Soon.

While Odd’s abilities are hardly common knowledge, it’s refreshing that the script doesn’t bog itself down with tired reveals. Odd has long ago confided in both his lifelong girlfriend, Stormy (Addison Timlin [IMDB]), and his close friend and police chief, Wyatt (Willem Dafoe [IMDB]). Both treat his revelations with a detached casualness that works, but threatens, at times, to make them appear apathetic.

The mystery is convoluted, as a good mystery should be, but never obtuse or capricious. Motivations are shallow and simple, yet strong and consistent. Somebody is out to kill hundreds of people and our heroes are out to stop them. Period. The pacing is excellent and the tension builds nicely, if predictably, as the climax nears.

Performances are solid across the board. Yelchin balances a boyish charm and a caring sincerity that easily ingratiates Odd to the audience. Timlin is strong and capable. Her pragmatism grounds Odd and counterpoints his fevered rush to action. Dafoe, of course, plays Willem Dafoe. He does this better than anybody and “Willem Dafoe” is exactly what his character needed.

While far from a drama, it’s confusing why this would be billed as a comedy. There are light moments, but few played specifically for laughs. The themes and tone compare very favorably, but play more seriously than, Peter Jackson’s 1996 ghost mystery “The Frighteners” [IMDB]. Fans of that classic should be well pleased with this at well.