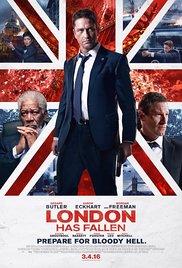 All of the principles have returned. Mike Banning (Gerard Butler [IMDB]), the Secret Service superhero is on the job. He’s expecting a baby and is considering early retirement. He doesn’t actually say, “I’m getting too old for this shit”, but you can see it in his eyes.  President Aaron Eckhart [IMDB] is still all apple pie and baseball. Morgan Freeman [IMDB] has gotten a bump from Speaker of the House to Vice President, but plays the exact same talking head as the first film.

World leaders have converged on London and evil terrorists have hatched an elaborate plot to take over the city and assassinate them. Mike is wearing a vest of eagle feathers and peanut butter, which enables him to save the president from the initial attack. They’re soon trapped with no place to hide. In a city of 600 square miles and eight million people.

So yes, this is pretty stupid.

The action is good even if the reasons for it are vapid. The digital effects used for several of the big “oh shit” moments aren’t particularly good, but they’re not particularly terrible either. Since we never see any pesky civilians (they’ve been told to “stay indoors” after all) there are no limits to the action. There’s extended car chases, helicopter battles, explosions and all the bullets anybody could want.

The jingoism is nearly as thick as the bullets. Mike tells a terrorist, “you should head back to fuckheadistan, or whatever it is you’re from.” When told that he’s facing over a 100 terrorists, he quips, “they should have brought more.” He also has his BIG MOMENT speech at the end about how the United States is more than a man or a flag and will be around for 1,000 years.

Some commenters apparently feel that this received less than glowing reviewing because it was “politically incorrect” or because it “told it like it is.” What they seem to miss is that it is, at its best, a decent action flick. At it’s worst, it’s a tortured, mediocre sequel for a movie that had no right to spawn one.