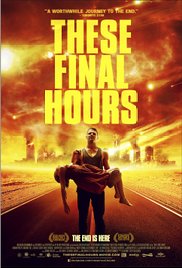 James (Nathan Phillips [IMDB]) is with his girlfriend in Perth when they hear the news. Unable to handle the fear and emotion, he leaves her for a “party to end all parties” at a friend’s estate. His only plan is to drink and drug himself into oblivion. Interrupted on the way, he rescues a young girl, Rose (up-and-coming actress Angourie Rice [IMDB]), from would-be rapists and reluctantly agrees to help her reunite with her father.

Rose and James move through the world and see the ways that others have decided to face their ends. Many work to fulfill hedonistic fantasies of sex, drugs and violence. Others take matters into their own hands, the means of their death the only thing they can still control.

The characters are human and understandable in their extremes. You may not agree with their choices, but considering the reality of the situation, it’s difficult to criticize them. The performances are impressive; rich and nuanced. The leads carry the depressing narrative well.

Make no mistake: this is a depressing narrative. The story is bleak and without a shred of hope. There is no escape and no sacrifice will make a difference. James is a selfish, emotionally stunted man-child suddenly faced with inevitable death and a single. terrifying question: “how do I want to die?”