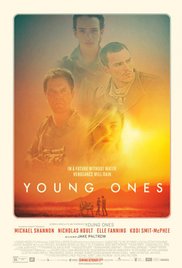 “Young Ones” on IMDB

Massive, worldwide drought has resulted in the collapse of governments, economies and communities. Ernest Holm (Michael Shannon [IMDB]) lives on the farmland he worked with his father as a child, hopeful that he can convince the owners of a new pipeline to divert some of its water to his arid land.

He and his son, Jerome (Kodi Smit-McPhee [IMDB]), work supply lines and do what they can for the locals. When their aged mule breaks its leg and has to be put down, Ernest heads to the city and buys a “Simulit”, a robotic cargo drone. Based on Alaska Robotics’ real-life “Big Dog“, the design situates us elegantly in the near, but not distant, future.

Ernest’s frustrated daughter, Mary (Elle Fanning [IMDB]), longs for something more. When Flem Lever (Nicholas Hoult [IMDB]), the son of the richest man in town, shows interest in her, she thinks she’s found it and hides the relationship. Unfortunately, Flem isn’t the man that she hopes he is. He has plans of his own for Earnest’s land.

Like the best science fiction, this begins by methodically crafting an engaging reality. An extensive, long-term drought is an all-too real threat and such an event would have disastrous effects on organized society. It then defines the rules that govern the reality. The water pipeline is controlled by a corporation that decides who gets access. Holm’s land is healthy, but arid, while the Lever land is overworked and unproductive.

The characters are then defined and placed in this world where they react to the pressures of it. The story evolves from the situation and the people within it. It’s a subtle distinction, but the result is smoother and more believable than deciding what the characters will do, then changing the world around them to allow it.

The movie is thoughtful, methodical and slow – likely too slow for some. It carries itself with a quiet surety. The performances are elegant and introspective. Refreshingly, feelings and intentions are conveyed through acting rather than overwrought narration and handholding. It’s a beautiful movie that deserves a look.