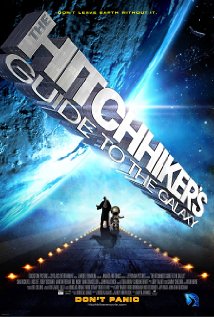 “The Hitchhiker’s Guide to the Galaxy” on IMDB

Today is the 12th annual Towel Day, a celebration of all things Douglas Adams.  In celebration (and since the kids happen to be home from school) we decided to grab our towels and cuddle up on the couch and watch this.

“The Hitchhiker’s Guide to the Galaxy” is one of the most beloved classics in geek literature.  It’s also one of the most adapted having appeared originally as a radio telecast then later adapted to books, television, stage and games.  Those that have only read the books may scoff at the film but true fans know that this story has always molded itself to the medium.

For those willing to accept that there’s almost no chance for a film version to mirror the source material exactly there’s a tremendous amount of fun here.  While some of the sequences are completely original to the movie (but very “Adams-esque”) most are lovingly pulled directly from the books.  The animated sequences of The Guide are wonderfully quirky and there can be no better narrator than Stephen Fry.

Mos Def and Martin Freeman are excellent and capture the spirits of Ford and Arther very well.  Sam Rockwell is appropriately wild as Zaphod (and is likely the character most changed in this version).  Zooey Deschanel is always a pleasure but let’s be honest: Adams was never really good at creating good female roles giving her little to work with.  Casting Alan Rickman as the voice of Marvin the Paranoid Android was absolutely inspired however.

The movie makes amazing use of practical effects.  The Vogons, especially, were amazingly realized and show that Jim Henson’s Creature Shop never lost their touch against the onslaught of CGI.  The general design of the film is vastly different from the books or any other interpretation but wonderfully realized.  Everything is bulbous, spherical and warm.  “Deep Thought”, a giant-bronze-head lolling lazily on spindly arms, was particularly effective.

Jaded fans can make arguments can be made about any of a million aspects of this but true fans should just sit back and enjoy it.  It was especially satisfying to watch with my family cuddled up with our towels.  I can’t recommend this enough if you have the option.